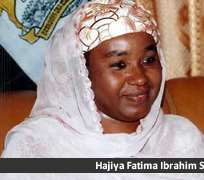 Power without responsibility is the prerogative of the harlot over the ages- Graham Greene in Brighton Rock.

There is a sense of dÃ©jÃ  vu in the irresponsible display of power by Katsina state first lady Hajiya Fatima Ibrahim Shema when she haughtily sacked a Supervisory Councillor in the state two weeks ago. The councilor’s sin is that she reacted in like manner to an unprovoked physical attack on her by the wife of caretaker chairman of Matazu local government council. The local government's first lady launched the offensive by slapping the councillor, who then engaged her assailant into a successful combat in public.

In 1996, Mrs. Thelma Ngozi Acholonu, wife of the then Military Administrator of Katsina state, Navy Captain Emmanuel Acholonu, had gone the devilish length of, yes, roasting five Government House gardeners by a bonfire for allegedly stealing monogrammed dinner sets, belonging to the state government. The missing items consisted of plates and cutleries.

The futile effort to suppress the news of Mrs. Acholonu's heinous act is playing out now with equally futile attempt to deny the role of Mrs. Shema in the sacking of the councillor.

Newspaper reports on Sunday last week had it that on the directive of the Katsina state first lady, the appointment of the Supervisory Councillor for Water and Sanitation in Matazu local government, Hajiya Hadiza Ibrahim, was summarily terminated.

The termination letter, MTLG/ADM/36/VOL.1, which read in part: 'I am directed by the office of Her Excellency, Hajiya Fatima Shehu Shema to issue you this letter because of your misconduct and behaviour. You are therefore directed to handover all official documents in your possession to your director with immediate effect, please', gave the reference letter from Mrs. Shema as GH/KTS/GWO/41/C. The termination letter was signed by the local council's staff officer, Malam Bala Lawal Yaro.

But in a swift refutal, the Governor's Senior Special Assistant on Media and Communications, Malam Lawal Ahmed Matazu described the reports of the sacking as incorrect. In a signed statement, the Governor's spokesman had averred that, 'Mrs. Shema is not on the staff of Matazu LGA, does not get involved in local or state administration and never ordered the sack of any councillor. The staff of Matazu LGA who signed the letter is on his own. We are surprised that a staff of Matazu LGA could stoop so low as to issue that directive when everyone knows that he does not take his instructions from Mrs. Shema'.

More surprised, indeed, must be the larger society at the Katsina first lady's mighty ego, which gave her the audacity to transgress beyond her matrimonial bounds and devilishly dabble into state matters, especially after her spokesman, Alhaji Abdul'aziz Imam, came clean by admitting his principal's guilt.

Back in 1996, a security detail attached to the Government House, who got the wind of the wickedness Mrs. Acholonu was planning for the five accused gardeners, had had the presence of mind to alert newsmen before too much harm was done to them.

And soon as she sighted newsmen, this writer , then with the now rested Kaduna based Democrat Newspaper inclusive, approaching the area where she was supervising the torture of the five, all undressed to only their briefs, Mrs. Acholonu fled from the scene muttering 'these stupid people are here'. But not before she gave an explicit order that under no condition must the newsmen be allowed near the scene and the victims, or to file the report of the incident. But a very senior government official, who also arrived on the scene after the torture had begun, directed the security officials to let the newsmen on the scene, but pleaded with us not to report what we saw. Some did not, but others, including yours faithfully, did.

When news of the torture hit the newsstands the following day, all hell kind of broke loose with a number of NGOs descending on Katsina to investigate. And aweek after, one of the NGOs, the Dr. Bashir Kurfi-led Network For Justice (NFJ), came to address a press conference. But on getting wind of the planned news conference, the government did all it could to truncate it by sending out security agents to all possible venues, including the Katsina Press Center, the Correspondent Lodge, the Katsina Motel and some hotels among others, to prevent journalists from congregating.

But the NFJ outsmarted the security operatives by discreetly inviting to and addressing the journalists at the Katsina High Court, which was located close to the headquarters of both the Police and the State Security Service (SSS).

As a result of government's determination to kill the story, only Democrat Newspaper published the report of the NGO's briefing, with the headline, 'NJF to dragKatsina state to court over torture'. With that report, I joined the league of the victims of government's heavy handedness, as I was detained by the SSS for 10 hours (from 8 am to 10 pm) for 'filing a false report'. But my detention, according to a source in the SSS, was a face saving measure for the failure of the service to find the venue of and stop the press briefing by the NFJ. I was also declared a persona non grata and barred from entering the Government House until the then Secretary to the State Government (SSG) came to my rescue some two weeks later. A week after my detention, the SSS Director in the state invited, for thefirst time according to him, members of the correspondents' chapel to what from then became a bi monthly ritual; an informal forum for the 'exchange of information and ideas' as the spook put it.

Sadly for one of the torture victims, he did not live long after that harrowing experience. He was hospitalised soon after the traumatic incident for a heart related problem and remained in the hospital for nearly two month. Two days after his discharge from the hospital, he died. I should know, because he was a distance cousin of my wife's, a fact I came to know only after his death.

It is sad that in Katsina not all of the first ladies will be remembered fondly after they might have exited the stage. First ladies are supposed to add value, especially where their spouses reign supreme, not to become irritants and nuisance to the society, as is evidently the case in Katsina state.

Even some of the so-called NGOs run by first ladies are simply nothing but avenues for siphoning public funds. But burning people on the mare suspicion of stealing in order to extracta confession, or sacking a government appointee, is surely taking the 'purview' of the self-serving office of the wife of a governor or, even, that of the president, to a ridiculous level. But having cowed everybody in the state, including the so-called power brokers whose power to move and shake has now been demystified, the first family in Katsina feels it can pretty well get away with murder, or something close.

This is hoping that Governor Shema does not allow this wicked meddlesomeness by his wife to stand.