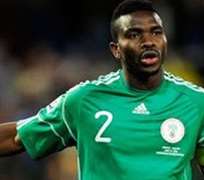 Nigeria Captain Joseph Yobo will play in his sixth Africa Cup of Nations finals after making the final list of 23 released on Wednesday night by Coach Stephen Keshi, who also made good his promise of including home-based players with six making the list.

Yobo also captained the Eagles in their goalless draw with Cape Verde in which the two-time AFCON winners were fortunate not to concede a goal.

Apart from Yobo, goalkeepers Enyeama and Austin Ejide, defender Elderson Echiejile, midfielder Mikel Obi and forward Ikechukwu Uche who were at the 2010 Africa Cup of Nations in Angola, the rest are profile-on-the-rise and ambitious performers ready to captivate Africa.

2009 FIFA U-17 World Cup silver medal-winner Omeruo will celebrate his 20th birthday on January 17, the day the team will land in South Africa, while fellow defender Elderson Echiejile, a star of the FIFA U-20 World Cup in Canada in 2007, will turn 25 on the eve of Nigeria’s first game against Burkina Faso.

Two-time champions Nigeria play Burkina Faso, Zambia and Ethiopia in Group C, with their first two games against the Etalons and the Cup holders coming up inside Nelspruit’s Mbombela Stadium on January 21 and 25 respectively, before a clash with Ethiopia’s Walya Antelopes in Rustenburg’s Bafokeng Sports Palace on 29th January.