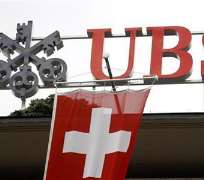 Swiss bank UBS accepted a $1.5 billion fine on Wednesday after admitting fraud and bribery in a deepening scandal over the rigging of global benchmark interest rates.

Dozens of UBS staff manipulated the Libor rate, which is used to price trillions of dollars worth of loans, across three continents in collusion with brokers and traders at other banks, according to an international investigation.

The controversy is expected to ensnare other big lenders and spark civil lawsuits as well as possible criminal proceedings against individuals involved. The penalty UBS agreed to with U.S., UK and Swiss authorities far exceeds the $450 million levied on Britain's Barclays in June, also for rigging Libor, and is the second largest ever imposed on a bank.

"We deeply regret this inappropriate and unethical behavior. No amount of profit is more important than the reputation of this firm," said UBS CEO Sergio Ermotti.

The Libor benchmarks are used for trillions of dollars worth of loans around the world, ranging from home loans to credit cards to complex derivatives.

Tiny shifts in the rate, compiled from daily polls of bankers, could benefit banks by millions of dollars. But every dollar a bank benefited meant an equal loss by a bank, hedge fund or other investor on the other side of the trade - raising the threat of a raft of civil lawsuits.

"The big unknown factor is the civil litigation that could follow on as a result of this," said Paras Anand, European equities head at Fidelity Worldwide Investment, one of UBS's biggest investors. "The issue for shareholders is the challenge of pricing that risk in."

UBS's unit in Japan pleaded guilty to one count of fraud relating to manipulation of benchmark rates, including the yen Libor. The probe highlighted the important role played by one UBS banker, identified as Trader A, who "embarked on a coordinated campaign" to influence the yen Libor rate.

The UBS fine comes a week after Britain's HSBC agreed to pay a record $1.92 billion to settle a probe in the United States into laundering money for drug cartels.

"You can see from the stock movement that the fine is already baked in," said Markus Jordi, principal at Zurich-based investment manager Cosmos Capital.

REPUTATIONAL HIT
The Libor settlement caps a torrid 18 months for UBS during which it lost $2.3 billion in a rogue trading scandal, underwent a management upheaval and made thousands of job cuts.

"We have to acknowledge that the behavior of certain of our employees who were disciplined during this investigation ... is and was unacceptable," Ermotti told reporters, adding that around 40 people had left UBS or had been asked to leave.

The reputational impact of the controversy may only emerge next year.

"The only thing shareholders can do is keep a very close eye on the money flows on the wealth management side," said Neil Wilkinson, portfolio manager at Royal London Asset Management.

"We may not see until the first quarter of next year whether they have lost any clients as a result of this."

The bank will pay $1.2 billion to the U.S. Department of Justice (DoJ) and the Commodity Futures Trading Commission (CFTC), 160 million pounds to the UK's FSA and 59 million Swiss francs from its estimated profit to Swiss regulator Finma.

The UK penalty is the largest in the history of the FSA and more than double the 59 million pounds paid by Barclays.

UBS said the fines would widen its fourth quarter net loss but it would not need to raise new capital.

CAPTAIN 'CAOS' AND SUPERMAN
Britain's FSA said attempts to manipulate Libor and Euribor, its European equivalent, were so widespread that every submission UBS made over a six-year period from 2005 to 2010 was suspect.

At least 45 people at UBS were involved in the rigging, which was discussed in internal chat forums and group emails but never detected by compliance staff, despite five audits.

The FSA said the manipulation was considered to be "normal business practice" by a wide pool of people within UBS.

In addition to traders trying to move the Libor rate up or down to make money for themselves, senior managers at the Swiss bank directed dealers to keep Libor submissions low during the financial crisis to make the bank look stronger.

The extent of the wrongdoing was highlighted in a series of emails released by the FSA. The exchanges show how traders and brokers conspired to rig the rate while adopting nicknames such as "Captain Caos (sic) and calling each other "superman", "hero" or "the three muscateers (sic)".

Traders paid brokers as much as 15,000 pounds a quarter for their help in rigging the rates.

It is the first time that brokers have been accused of taking bribes to aid manipulation. ICAP, the world's largest inter-dealer broker, and rival RP Martin have suspended employees in connection with the probe.

Last week, British police arrested three men, including former UBS and Citigroup trader Thomas Hayes, in connection with the Libor probe, the first such arrests. The two others were Terry Farr and James Gilmour, who both worked at interdealer broker RP Martin.

Until the rate-rigging scandal broke, Libor had been ignored by regulators and left to the banks to police. From next year, Britain's FSA will have oversight of it as part of a major overhaul.

The steep fine for UBS is despite the bank, since 2011, cooperating with law-enforcement agencies in their probes. The bank said it received conditional immunity from some regulators.

A similar admission by Barclays in June touched off a political firestorm that forced its chairman and chief executive to quit.