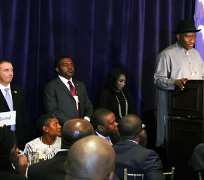 Jonathan, speaking in New York at a dinner organised in his honour by the Corporate Council on Africa, disclosed the whole commitment of his administration to promoting the development of a knowledge-economy that will enhance the security of lives and properties, thereby accelerating growth to provide more employment and reduce youth restiveness.

“Let me restate here that Nigeria’s foreign policy is now anchored on the realisation of this Transformation Agenda through the attraction of Foreign Direct Investment,” Jonathan said.

“Under the new policy thrust, our Diplomatic Missions abroad have been directed to focus more on attracting investment to support the domestic programmes of government with a view to achieving not only our Vision 20: 20202, but to bequeathing an enduring a legacy of economic prosperity.”

He assured guests at the dinner that adequate safety nets have been established to protect all foreign investors in Nigeria, and that such measures include the establishment and strengthening of the Infrastructure Concession and Regulatory Commission and the Bureau of Public Procurement. He equally assured that his administration would deal decisively with the country’s security challenges.

“We have some security challenges now, but let me assure you that the Nigerian Government is on top of it. We are dealing with the issue decisively; it will soon be a thing of the past.

“Opportunities abound for would-be investors with capital and technical know-how in key areas of Nigeria’s economy with high rates of return on investment. I invite our friends in the United States to take advantage of existing incentives and invest more in Nigeria.

“I am confident that by the year 2015, Nigeria would have witnessed transformation in all sectors to the benefit of not only its citizens, but also those who have an interest in Nigeria.”

Noting that Nigeria is already a very important destination for American companies and the second highest recipient of American direct private sector investment in Africa, Carson expressed optimism that Nigeria would become a great economic success over the next decade.

He announced that the US-Nigeria Bi-National Commission, which has been established as a primary platform for the promotion of trade and economic cooperation between the two countries, will meet again in Nigeria next month.

President Jonathan’s other engagements in New York on Wednesday included meetings with President Sauli Ministo of Finland and the President of the Swiss Confederation, Mrs. Eveline Widmer-Schlumpf.

He had met earlier with President Francois Hollande of France, the Emir of Qatar and President Jacob Zuma of South Africa. He also received representatives of the over 200 Nigerians who currently work for the United Nations and its agencies.

President Jonathan and Prime-Minister Jens Stoltenberg of Norway, with whom he serves as Co-Chairperson of the United Nations Commission on Life-Saving Commodities for Women and Children, also participated at an event to promote its work.