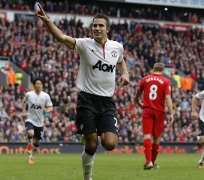 The prolific Dutchman sealed the victory when he fired his spot kick past the despairing dive of Pepe Reina after Glen Johnson had brought down Antonio Valencia.

Despite being well below their best United moved into second spot with 12 points, one point behind leaders Chelsea.

The first match at Anfield since the Hillsborough report cleared Liverpool's fans of blame for the deaths of 96 of their number at the 1989 FA Cup semi-final, sparked into life after 39 minutes when Jonjo Shelvey was red-carded for a dangerous lunge.

However, the home side deservedly went ahead straight after halftime through Steven Gerrard's volley.

United hit back after 51 minutes through Rafael's curler before Van Persie's late strike meant that after five games Liverpool are still looking for their first league win of the season -- their worst start to a Premier League campaign.

"The last three or four years we have come and played better but not got anything, that is the way it goes sometimes," United skipper Ryan Giggs told Sky Sports.

"Liverpool wanted to put on a performance because of the occasion and they did that. They played well, but we can play better."

One of the fiercest rivalries in world soccer was briefly put to one side before kickoff as players and fans from both clubs respectfully marked a tribute to those killed in the Hillsborough tragedy.

An independent report published this month revealed that the disaster was caused by a breakdown in crowd management and was later the subject of a police attempt to pin the blame for the horrific crush on Liverpool's fans.

The crowd held up white and red cards spelling out "TRUTH" and "JUSTICE" as the players walked out on to the pitch in tracksuits emblazoned on the back with 96.

Opposing captains Gerrard and Giggs released 96 balloons into the Merseyside sky and the anthem "You'll Never Walk Alone" reverberated around the stadium with added emotion.

Even the race row between Luis Suarez and Patrice Evra was finally put to bed as they shook hands before kickoff.

Once the whistle went, however, it was Liverpool who settled down quicker, controlling the much of the first period.

Gerrard went close to giving them the lead and Fabio Borini should have done better with a half chance.

FIRST FLASHPOINT
The first flashpoint came after 39 minutes when Liverpool's impressive young midfielder Shelvey lunged in feet first in a 50-50 tackle with Jonny Evans and was shown a red card.

He then gesticulated angrily at Alex Ferguson as he left the pitch, souring the mood of goodwill that had existed hitherto.

Shelvey's red card looked like turning the match in United's favour but instead it was Liverpool who took the lead a minute into the second period.

United again looked half asleep as Johnson surged into the area and when the ball looped up to Gerrard the England skipper had time to slam a precise left-footed volley past Anders Lindegaard.

It sparked wild celebrations around Anfield but they were soon silenced when Rafael equalised six minutes later, curling a shot beyond the reach of Reina from a tight angle.

Making their extra man count, United began to enjoy more possession although Liverpool, despite being down to 10 men, continued to show the greater hunger.

Suarez blasted one shot across the face of goal as Liverpool remained on top. Sensing an unlikely win they continued pushing men forward but when Valencia seized possession in his own half he set off on a blistering run that was ended by the desperate lunge of Johnson.

Van Persie, who missed from the spot earlier this seasonm for United, had to wait four minutes as Daniel Agger received treatment but he kept his cool to send a left-footed effort into the corner despite Reina almost clawing it away.