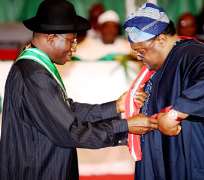 ABUJA, September 17, (THEWILL) – President Goodluck Jonathan on Monday decorated the recipients of this year’s National Honours Award, and defended the decision to honour Dr. Mike Adenuga with the highest honour of Grand Commander of the Order of Niger (GCON).

Adenuga’s honour, he explained, is due to his contributions to the growth and development of the nation's economy over the years.

He, however, stated that any recipient of the award, past or present, who has been indicted or convicted for a crime or who is facing criminal offenses will have his/her award withdrawn.

“Mike Adenuga Jnr, has contributed immensely as a businessman and an entrepreneur to the growth and development of our economy. He worked hard to establish Globacom as an international communications company, which provides means of livelihood to over 100,000 Nigerians,” he said.

Congratulating the honourees, Jonathan emphasised that a National Award is one of the greatest honours a country could ever bestow on its citizens, and admonished them to see their awards as a privilege and not a right.

“While the honour recognises your unique contributions to Nigeria, let me state that it is also a call to greater commitment and sacrifice for the furtherance of the development of our dear country,” he said.

“I urge you to be beacons of hope and inspiration for Nigerians. You must continue to exemplify a distinct sense of responsibility and a commitment to the community that makes for a great nation.”

Speaking on behalf of the awardees, Justice Mary Odili thanked the committee for finding them worthy of the honour, promising that rather than relenting, they would work harder in their various fields.

“Mr. President, words are inadequate to capture this moment. We are grateful for what has happened today. We appreciate what you have done. We are indeed grateful and cannot forget this moment,” she said.

“You have honoured us and we feel privileged of the honour given to us by a grateful nation. Whatever must have caught the attention of those who put our names on marble, we happy. We promise that in various field of endeavour, we shall work harder.”

The Paralympics gold medalists and the designer of world first electrical car, Mr. Jelani Aliyu, were the cynosure of all eyes as the 30th edition of the award.

Aliyu designed ‘Chevy-Volt,’ the world’s first electric car, which has been described by U.S. President Barrack Obama as an American Revolution and hottest concept in design line.

Jonathan similarly commended Muhammad Tahir Zakari, a Level 10 Officer in the Office of the Accountant General of the Federation, for showing “remarkable honesty in returning an error payment to him of over N6 million in November 2011. This is a commendable behaviour that should be emulated.”

The Grand Commander of the Order of the Niger (GCON) had only one recipient: Chief Mike Adenuga, a business mogul.