JAPAN KNOCKED BRAZIL OUT OF THE OLYMPICS WOMEN FOOTBALL 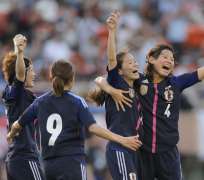 Japan this evening advanced to the semi finals of the Olympics women's football by 2-0. Japan who were highly tactical and discipline sat deep in defence to soak all the pressure from their opponents who were really strong and skilful.

Japan played purposeful defensive game due to the skilful nature of their opponents Brazil, were clinical in their finishing. Japan took a surprise first half lead through Yuki Ogimi before Shinobu Ohno sealed the victory late in the second half to shutter the dreams of the Brazilians getting an Olympic medal.

The Japanese looked more powerful and dangerous in their surging attack, in contrast with the Brazilians who were blessed with skill and flair but could not transform it to victory. Defending Olympic champions USA also booked their semi final ticket by beating New Zealand 2-0.

Canada proved too strong for team GB by winning 2-0 to book a place in the semis against their neighbours and defending Olympic champions on Monday. France came from behind to beat Sweden 2-1 to book their place against Japan in the semi final. Both Japan and US eyes women's final rematch. Both teams met last year in the women's world cup finals which ended in favour of Japan on penalties.