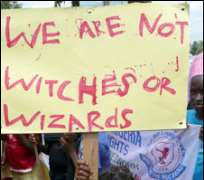 
Police in south-east Nigeria have arrested a man who claimed to have killed 110 child "witches".

But after his arrest, he reportedly told the police he had only killed the "witches" inside, not the children.

Child rights campaigners say children are frequently abandoned, hideously injured and even murdered because their families believe they are witches.

Self-proclaimed "pastors" extort money from families to exorcise the children, but none has been charged until now.

Mr Ulup-Aya was arrested in Akwa Ibom State after a child rights campaigner led police to his church and negotiated a consultation fee for an exorcism.

He has now been charged with murder.
Five others have been arrested since the weekend and the state government says more arrests are planned.

Embarrassed
"So many people here believe that children can be possessed by demons that there is rarely any action taken against those who claim to deliver the children in violent exorcisms," says Sam Ikpe-Itauma, of the Child Rights and Rehabilitation Network (CRARN).

He says he has been working for six years to bring the attention of the state government to the children being abandoned, sold to traffickers, or murdered.

But it was not until a British documentary - Dispatches: Saving Africa's Witch Children - was aired on Channel 4 last month that an arrest was made.

His organisation is looking after 170 children who have been abandoned or abused after being accused of being witches.

Akwa Ibom State spokesman Aniekan Umanah denied they had been embarrassed into acting.

"Nobody knew about him, he lives in a very remote village," he said.
The state has cared for child victims of abuse, but has not been able to track down abusers because of "lack of documentation", he said.

He said there was a misunderstanding - he meant he had killed the witch inside the child, not the child themselves.

When police raided his house they found two children inside, but no evidence that any others had been murdered there.

"We have him on tape admitting to killing," said Mr Umanah.

"It is now up to him to prove otherwise."
In the past other "pastors" who claim to have the power to deliver children from demonic possession in violent exorcisms have been arrested, but then quietly released by the police, according to Mr Ikpe-Itauma.

Now children are blamed for all kinds of misfortune that befalls their families.

They are abandoned or sold to child traffickers who then indenture them as house-workers in other parts of Nigeria or into prostitution.
Others are violently exorcised to rid the child of the "demons".

Exorcism victims seen by CRARN in the past include a child who had nails driven into her head.

Earlier this week Mr Ikpe-Itauma said a six-year-old child was brought to their rescue centre after clambering out of a fast-flowing river.

"The boy's uncle was experiencing painful swelling in his legs," Mr Ikpe-Itauma told the BBC.

"He concluded the child was a witch and had placed a curse on him, so he took him on his bicycle to the river and threw him in."