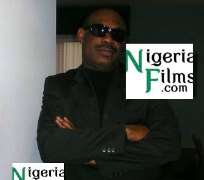 Before now, some have still believed that Nollywood's veteran actor, Enebeli Enebuwa was the father of Nigeria's top music producer, Don Jazzy.

But now, Michael Collins Enebeli, who is well known as Don Jazzy, has released a picture of his real dad.

The multiple award winning music producer released his father's picture on a social networking site, Twitter, today. The Mavin Records boss did this in celebration of Fathers' Day being marked today, Sunday, June 17, 2012.

He tweeted, "Shout out to the 'baddest pupsi' ever. Don Collins aka Mavin grandpa, aka my daddy. Happy Fathers' Day."

Don Jazzy is one of Nigeria's top music producers. He became popular in 2005 when he introduced D'Banj, who was under his former label, Mohits, into Nigerian music scene.

Don Jazzy and D'Banj broke their business relationship in Mohits Records early 2012 after weeks of speculation on a rift between them.

Cute dad you would say? But who is cuter between father and son?

I am not desperate to marry.I believe that God's time is the best

I do not regret shutting down Indulge Spa – Modupe Ozolua