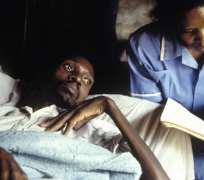 Principled collaboration by churches is urgently needed to help defeat HIV. Why? Recent report in the media talk of the increasing spread of HIV in some part of the Country Nigeria. Also some efforts to defeat the spread on the part of some agencies and government. What is the Church of Jesus Christ doing? And what can churches do to help curtail the spread as well victims of HIV? Fifteen-year-old Isaiah Gakuyo from rural Kenya may become the Ryan White of HIV/AIDS in Africa. Ryan White was a hemophiliac exposed to HIV in the 1980s before donated blood was fully screened. The Kokomo, Indiana, teenager famously testified before Congress about his battle against discrimination. "Even at church, people would not shake my hand," he said two years before his death in 1990.

Gakuyo's tragic life story of losing both parents to AIDS, being infected with HIV, and living in deep poverty is only exceeded by the senseless act of his destitute uncle and guardian this past spring. The uncle killed his nephew in a fit of frustration and rage. "We are all angry at the uncle, but how many of us tried to help him when he was taking care of the boy?" asked Wangari Maathai, a Kenyan activist, according to the Los Angeles Times. Decimated by HIV, Africans are desperate for family-friendly care. Weeks after the killing, Kenyans demonstrated with posters that read, "I Am Positive. Don't Hate Me." Since the first HIV/AIDS case in 1981, we all have come a long way. But HIV has moved faster. Every year for the past 25 years, the death toll has been higher and the case load greater than the year before.

Stop the Trash Talk: Millions of people at risk of HIV infection fall through the best government safety nets, and that's where Christians acting locally and thinking globally have a leadership role to play. This relational pandemic calls for a morally attentive, relational response. Christians should incarnate the many comparative advantages churches have over secular agencies. Last year, nine influential Christians worked with the Oxford Centre for Mission Studies to map out how congregations may contribute to the HIV/AIDS fight. Their 76-page report is a stunning achievement based on field research in Africa, Latin America, and Asia.

They conclude: "Christian congregations must more effectively provide what they are specially or even uniquely positioned to contribute, and they must also cultivate better connections with groups Christian and secular that work at national or international levels." But Christian activists and secular elites are pouring too much effort into fighting each other over HIV prevention. Faith-based programs frequently face a hostile reception from Western medical experts. There is overheated rhetoric on both sides. Wouldn't it be better to gather persuasive, reliable evidence of results rather than trash-talking each other?

Principled collaboration provides another way. At its heart is a commitment to define shared interests. The most self-evident shared interest concerns saving lives. It took years of effort, but finally life-saving, anti-retroviral (ARV) drugs are increasingly available globally. Within the next year, about 3 million people should be on ARVs. Creating, financing, and maintaining drug distribution is strength of big agencies and national governments. It's something Christians can endorse. Yet there are limits to collaboration. It should occur within the confines of an organization's mission and the intent of its donors. For example, faith-based groups should not give funds to those who oppose their missions.

Quality of life and care for orphans and people living with HIV embody other shared interests. Healthy churches are unrivaled in their comparative advantage of working at the grassroots. Africans have a saying, "Not all are infected, but all are affected." Specifically, grassroots work includes HIV testing, counseling, preventing mother-to-child transmission, paying school fees for orphans, providing food aid, treating opportunistic infections—and especially weeping with those who weep, and rejoicing with those who rejoice. In addition, church leaders can model a theology of sexuality that affirms abstinence before marriage and faithfulness after marriage. And our most important and unique contribution remains sharing the gospel that offers forgiveness and the power to change.

Out of the Comfort Zone: Despite our many unique advantages, we cannot defeat this pandemic alone. HIV ministry often calls for out-of-the-comfort-zone teamwork that might include these types of partnerships: (1) South and north: Christian leaders in the Global South are much more experienced with church-based HIV ministry than many of their northern counterparts. (2) Faith-based and secular: For instance, a leading secular group, Physicians for Human Rights, aspires to find ways to partner on HIV-prevention efforts with Roman Catholics and evangelicals. (3) Volunteers and professionals: Experts realize there are not enough pros (or enough money to pay them) to defeat HIV. When professionals train motivated Christian volunteers, effective outreach is multiplied at low cost.

In Lusaka, Zambia, Bishop Joshua H. K. Banda (Assemblies of God) has seen countless families crippled by HIV. In the Oxford report, he said, "One of the greatest challenges we face is the family of the patient. It is simply not enough just to talk to the patient alone. One has to include the whole family in the treatment plan." Bishop Banda cites an African proverb to help make his point: "If you want to go fast, go alone. If you want to go far, go together." The HIV pandemic is far in advance of the global response. In 2004, a Lausanne panel meeting in Thailand declared that HIV/AIDS is a world evangelization issue. They said, "At the end of this century, the question will be: Where were you when this diabolical holocaust worked its course in human history?" Let's not await 2099 to give our answer. Helping Hands Rescue Mission – A mission of helps is involved to collaborate with other faithbased organizations to give hope to HIV/AIDS victms. Have question you may call: 08033399821 or write: [email protected] Stay blessed.