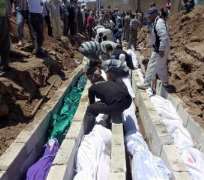 The U.N. Security Council on Sunday unanimously condemned the killing of at least 108 people, including many children, in the Syrian town of Houla, a sign of mounting outrage at the massacre that the government and rebels blamed on each other.

Images of bloodied and lifeless young bodies, laid carefully side by side after the onslaught on Friday, triggered shock around the world and underlined the failure of a six-week-old U.N. ceasefire plan to stop the violence.

Western and Arab states opposed to Syrian President Bashar al-Assad put the blame for the deaths squarely on the government. But Damascus rejected the charge.

"The Security Council condemned in the strongest possible terms the killings, confirmed by United Nations observers, of dozens of men, women and children and the wounding of hundreds more in the village of (Houla), near Homs, in attacks that involved a series of government artillery and tank shellings on a residential neighborhood," the non-binding statement said.

"Such outrageous use of force against civilian population constitutes a violation of applicable international law and of the commitments of the Syrian Government under United Nations Security Council Resolutions," the statement said.

Russia, which along with China has vetoed two Security Council resolutions calling for tougher action against Damascus, said the "tragic" events in Syria deserve condemnation and called for a U.N. assessment of the violence there.

Russian Deputy U.N. Ambassador Alexander Pankin said the circumstances surrounding the massacre were "murky" and rejected the idea that the evidence clearly showed Damascus was guilty.

The head of the U.N. observer force, General Robert Mood, briefed the council by video link. Pankin said Mood "did not link directly the (army's) shelling with numbers of deaths."

U.N. Secretary-General Ban Ki-moon sent the council a letter that appeared to give ammunition to both sides.

He said the observers "viewed the bodies of the dead and confirmed from an examination of ordnance that artillery and tank shells were fired at a residential neighborhood." The rebels do not have artillery and tanks.

But Ban also said U.N. monitors observed shotgun wounds on some of the bodies, which could indicate close-range attacks by rebels, as Pankin suggested, or could be the result of follow-up attacks by the army after it stopped shelling.

"While the detailed circumstances are unknown, we can confirm that there has been artillery and mortar shelling," Ban said. "There have also been other forms of violence, including shootings at close range and severe physical abuse."

International mediator Kofi Annan and Ladsous are expected to brief the council on Syria on Wednesday.

RUSSIA OPPOSES SANCTIONS
British Ambassador Mark Lyall Grant did not have any doubts about who was responsible for the events in Houla.

"It seems quite clear that the massacre in Houla was caused by heavy bombardment, by government artillery and tanks," Lyall Grant said. After the council meeting he said it was time for the council to discuss "next steps" - a code word for sanctions.

"The fact is, it is an atrocity and it was perpetrated by the Syrian government," Lyall Grant said.

Russia, however, rejects the idea of sanctioning its ally and has accused the United States and Europe of pursuing Libya-style regime change in Syria, where Assad has been trying to crush a 14-month-old insurgency that began peacefully but has become increasingly militarized.

Syria is home to the Russian navy's only warm-water port outside of the former Soviet Union and is a major purchaser of Russian weapons.

Syrian Ambassador Bashar Ja'afari reiterated his government's denial, saying the massacre was committed by "armed terrorist groups" - the Syrian government's term for the rebels. He also dismissed the "tsunami of lies" of the British, French and German envoys, who blamed the government for the massacre.

"Women, children and old men were shot dead. This is not the hallmark of the heroic Syrian army," Foreign Ministry spokesman Jihad Makdesi told reporters in Damascus.

The Houla massacre is among the worst carnage in the uprising against Assad, which has cost about 10,000 lives.

In his public comments, Mood has called the killings "a very tragical expression" of the situation in Syria, but refrained from apportioning blame.

"For myself, I have had patrols on the ground all the day yesterday afternoon and today we are gathering facts on the ground and then we will draw our own conclusions," Mood told the BBC in a telephone interview on Sunday.

But Ban and Annan, the U.N. and Arab League envoy for Syria, accused the Syrian government of using artillery in populated areas.

"This appalling and brutal crime involving indiscriminate and disproportionate use of force is a flagrant violation of international law and of the commitments of the Syrian Government to cease the use of heavy weapons in population centers and violence in all its forms," they said in a joint statement on Saturday.

Annan is planning to visit Damascus soon. Ja'afari suggested Annan could arrive as early as Monday.

Russia's Pankin said that whoever caused the massacre wanted to disrupt Annan's visit. "We don't believe the Syrian government would be interested in spoiling the visit of (Annan) ... by doing something like that."

"CORPSES WERE PILED ON TOP OF EACH OTHER"
Opposition activists said Assad's forces shelled Houla after a protest and then clashed with fighters from the Sunni Muslim-led insurgency.

Activists say Assad's "shabbiha" militia, loyal to an establishment dominated by members of the minority Alawite sect, then hacked dozens of the victims to death, or shot them.

Maysara al-Hilawi said he saw the bodies of six children and their parents in a ransacked house in the town.

"The Abdelrazzak family house was the first one I entered. The children's corpses were piled on top of each other, either with their throats cut or shot at close range," Hilawi, an opposition activist, said by telephone from the area.

A video distributed by activists showed an injured woman, who said she had survived the massacre, blaming shabbiha militiamen for the carnage.

"They entered our homes ... men wearing fatigues herding us like sheep in the room and started spraying bullets at us," the woman said. "My father died and my brother, my mother's only son. Seven sisters were killed," the woman said lying next to another injured woman and near a baby with a chest wound.

The White House said it was horrified by credible reports of brutal attacks on women and children in Houla.

"These acts serve as a vile testament to an illegitimate regime that responds to peaceful political protest with unspeakable and inhuman brutality," a White House spokesman said.

The Gulf Cooperation Council of Sunni-led monarchies accused Assad's soldiers of using excessive force and urged the international community to "assume its responsibilities to halt the daily bloodshed in Syria."

EU foreign policy chief Catherine Ashton spoke of a "heinous act perpetrated by the Syrian regime against its own civilian population" in a statement on Sunday. U.N. human rights chief Navi Pillay said in a statement that it could amount to crimes against humanity or other war crimes.

On Sunday, at least 30 people were killed when Syrian army tanks shelled residential neighborhoods in the city of Hama that have been serving as bases for rebel attacks against loyalist forces, opposition activists said. The reports could not be verified independently.

Although the ceasefire plan negotiated by Annan has failed to stop the violence, the United Nations is nearing full deployment of a 300-strong unarmed observer force meant to monitor a truce.

The plan calls for a truce, withdrawal of troops from cities and dialogue between government and opposition.

Syria calls the revolt a "terrorist" conspiracy run from abroad, a veiled reference to Sunni Muslim Gulf powers that want to see weapons provided to the insurgents.