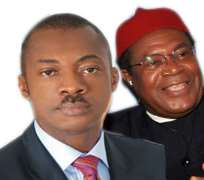 By Emmanuel Aziken, Political Editor
Last Monday's court victory of Governor Sullivan Chime is received with different appendages by the contending political forces in the State

It was different strokes on Monday in Enugu as the judgment of the Federal High Court on the pre-election candidature of Governor Sullivan Chime distilled in the Coal City State.

While the camp of the governor was ecstatic in their celebration of what they saw as the confirmation of Chime's  election, nonplussed traducers of the governor  claimed the judgment had turned justice on its head.

'We view today's landmark judgment as a victory for democracy and all those, who believe strongly in the good work of our dynamic Governor, His Excellency Sullivan Iheanacho Chime in Enugu State,' Engr. Vita Abba, the chairman of the mainstream Peoples Democratic Party (PDP) said in his immediate reaction to the judgment of Justice Adamu Bello of an Abuja Federal High Court that Monday.

Abba, a close associate of the governor was to add that the judgment was another sign of blessing arising from last weekend's interment of the governor's mother.

'It is also another set of blessing from the late Mother of our Governor, Chief Mrs. Theresa Ekpeluchi Chime, whom we cherished so much and accorded a well-deserved last respect few days ago,'  Abba added.

However, Chief Okey Ogbonna, factional chairman of the PDP in Enugu State,  sang a different tune. He said: 'I am surprised that a candidate who bought a form, was screened and cleared and was even awarded marks in their so-called primaries, and you say he had no locus.'

Ogbonna told Vanguard in a telephone interview that the faction of the party he leads would pursue the case as a long distance race.

In his  judgment, Justice Bello had declined jurisdiction in the case filed by a gubernatorial aspirant in the 2011 party primaries, Chief Alexander Obiechina as he pronounced that the sponsorship of a candidate in any election was wholly the domestic affair of the party.

Gov Chime and Chief Nwodo
At the centre of the dispute within the PDP was the different gubernatorial primaries organized by the different camps of the party in the state just before the deadline for the submission of the party's candidates to the Independent National Electoral Commission, INEC.

The conflict in the state chapter had been exacerbated by the split between supporters of the governor and those of the erstwhile National Chairman of the party, Dr. Okwesileze Nwodo. It was alleged that as PDP national chairman, that Nwodo who was at that time  feuding with Chime wanted to put his supporters at an advantage over members of the Chime group during the nominaiton exercise.

As Chime triumphed over Nwodo in the battle of wits forcing Nwodo to resign as party chairman, the Chime group seemed to have consolidated themselves. But lingering behind was the perceived lack of commitment of INEC to the interest of the PDP and the cause of the Chime group.

While the case lasted, INEC had in its submission through its counsel seemed to weaken the case of the governor with its inference that the primary that produced the governor was not in satisfactory compliance with the provisions of the Electoral Act 2010 as amended.

The judge in his ruling on Monday, however, disagreed with the INEC and pronounced that the plaintiff being not recognized by the national PDP lacked the locus to challenge what was done by the party.

Besides, INEC had also alleged that the primaries organized by the mainstream section of the party did not give sufficient notice as expected by the Electoral Act.

'Certainly no one should be left in doubt that the envisaged notice of 21 days was not complied with in obvious violation of section 85(1]). Added to the foregoing is the fact that the resident Electoral Commissioner cannot be regarded as the Commission, which presents a further violation,' INEC added in its submission.

And given that the PDP was wholly behind Chime in the dispute, the presiding judge did not find it difficult using that prop as a kernel to uphold the governor's defence.

In deciding the case in favour of Chime, the court had also taken into consideration a recent judgment concerning the immediate past governor of Bayelsa State, Chief Timipire Sylva and the PDP in which it was decided that the party had a right to bar a member from participating in its nomination primaries.

Besides Abba, Chime's victory was also welcomed by the State Commissioner for Information, Mr. Chuks Ugwoke.

'We thank God for His mercies and express our gratitude to the good people of Enugu State and our numerous well-wishers for their faith and solidarity.

'It's the triumph of justice over what was, abi nitio, a needless distraction. This victory belongs to all lovers of peace. His Excellency, Governor Sullivan Ihenacho Chime is committed, as ever, to continue to deliver solid democracy dividends as he enthrones good governance in our dear state.'

Ogbona, the factional chairman was, however, unwavering in his determination to pursue the case which he said would now turn into a long distance race.

'The Judge has given his own opinion but we are moving ahead and that is why we have Appeal Court and even the Supreme Court. In the next few hours, we will get the notice of appeal and we all know that it is going to be a long distance race and whatever the Supreme Court gives us we will take.

'There is no way that anybody will go to bed on this issue, we will seek for justice for our people. If you make a call across to Enugu now, you will see that all the market people are mourning,' he declared in clear contrast to the vivaciousness that was in the Chime camp after the judgment.

Askedthe likelihood of pursing a political solution given the clear inclination of the national secretariat towards the governor, Ogbona was unwavering as he alleged that the governor had shut the door to  internal opposition.

The case has, inevitably, drawn the party in the state back to the trenches. It is a clear return to the schism that has characterized the Enugu chapter of the party since  2000 when the second civilian governor of the state and apostle of the Ebeano phenomenon, Dr Chimaroke Nnamani, broke away from the tentacles of his one-time godfather, Chief Jim Nwobodo.