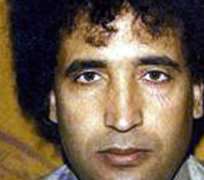 He was the embodiment of one of modern Libya's darkest chapters — a man synonymous with horrifying scenes of wreckage, broken families and a plane that fell out of the sky a generation ago. His name, Abdel Baset al-Megrahi, was little known compared to the single word that his deeds represented: Lockerbie.

Seven months after his patron dictator Moammar Gadhafi was slain in a revolution that began a new chapter for his homeland, al-Megrahi died Sunday of cancer, leaving behind countless unanswered questions about the midair attack in 1988 that blew up Pan Am flight 103 over Scotland. All 259 people on board — mostly Americans — and 11 on the ground were killed.

"I am an innocent man," al-Megrahi insisted, most recently in his final interview in December, in the final stages of prostate cancer. "I am about to die and I ask now to be left in peace with my family."

But his death at age 60 leaves no peace for families who still question his guilt and whether others in one of history's deadliest terror attacks went unpunished. Scotland's government said it would continue to investigate the bombing even after al-Megrahi's death.

"He holds the key to what actually took place in Pan Am 103," said Bert Ammerman, whose brother was killed in the bombing. "He knows what other individuals were involved and, more importantly, what other countries were involved."

His attorneys had argued that the Libyan intelligence officer was scapegoated to protect the real culprits: Palestinians acting on the behest of Iran.

Al-Megrahi's death comes about three years after Scottish authorities released him on humanitarian grounds, to the outrage of victims' relatives. At the time, doctors predicted he had only three months to live after he was diagnosed with prostate cancer. He ended up serving eight years of a life sentence.

Anger over his release was further stoked by the hero's welcome he received on his arrival in Libya — and by subsequent accusations that London had sought his release to protect business interests in oil-rich Libya. Britain and Scotland denied the allegations.

In the months ahead of his release, Tripoli put pressure on Britain, warning that if the ailing al-Megrahi died in a Scottish prison, all British commercial activity in Libya would be cut off and a wave of demonstrations would erupt outside British embassies, according to leaked U.S. diplomatic memos. The Libyans even implied "that the welfare of U.K. diplomats and citizens in Libya would be at risk," the memos say.

Al-Megrahi kept a strict silence after his return, living in the family villa surrounded by high walls in a posh Tripoli neighborhood, mostly bedridden or taking a few steps with a cane. Libyan authorities sealed him off from public access, and on Sunday scores of fellow clan members surrounded his residence to keep the media away.

Al-Megrahi's son, Khaled al-Megrahi, confirmed that he died in Tripoli in a telephone interview but hung up before giving more details. Saad Nasser al-Megrahi, a relative and a member of the ruling National Transitional Council, said al-Megrahi's health had deteriorated in recent days and said he died of cancer-related complications.

Al-Megrahi was convicted in 2001 of planting the bomb aboard Pan Am Flight 103 by a Scottish court set up in the neutral ground of a military base in the Netherlands. The bomb blew up the jetliner as it flew over Lockerbie, Scotland, on Dec. 21, 1988. The New York-bound flight originated at London's Heathrow airport and many of the victims were American college students flying home for Christmas.

The father of one of the Lockerbie victims said al-Megrahi's death was "to a degree a relief" and said his release had little to do with his health.

"If he had been that bad three years ago, he wouldn't have lived this long. It was a political deal," said Glenn Johnson of Greensburg, Pennsylvania, whose 21-year-old daughter Beth Ann Johnson was killed in the bombing.

A spokesman for British families who lost loved ones in the bombing said he always believed al-Megrahi was innocent.

"His death is to be deeply regretted," David Ben-Ayreah said. "As someone who attended the trial I have never taken the view that Megrahi was guilty. Megrahi is the 271st victim of Lockerbie."

The Scottish government said Sunday that it will keep on investigating the bombing despite al-Megrahi's death. Scotland's First Minister, Alex Salmond, said prosecutors have always believed that al-Megrahi did not act alone in the bomb plot.

Little was known about al-Megrahi before he was charged, but he became a central figure in both Libya's falling out with the West and then its return to the international fold.

Gadhafi's regime presented his handover to Scotland in 1999 as a necessary sacrifice to restore Libya's relations with the world.

Gadhafi handed over al-Megrahi and a second suspect to Scottish authorities after years of punishing U.N. sanctions. Four years later, in 2003, Gadhafi acknowledged responsibility — though not guilt — for the Lockerbie bombing and paid compensation of about $2.7 billion to the Lockerbie victims' families. He also pledged to dismantle all weapons of mass destruction and joined the U.S.-led fight against terrorism.

In 2001, the Scottish court — hearing the case in the Netherlands — convicted al-Megrahi of planting the bomb but acquitted his co-defendant, Lamen Khalifa Fhimah, a Libyan Arab Airlines official, of all charges.

The prosecution's case was built around a tiny fragment of circuit board discovered among the airline wreckage that investigators determined was part of the timer of the bomb, hidden in a suitcase. Investigators said the suitcase was loaded onto a flight from Malta, booked through to Pan Am 103 via Frankfurt.

An executive from a Swiss company testified he had sold timers of the same make to Libya. Investigators found that al-Megrahi traveled to Malta on a false passport a day before the suitcase was checked in and left the following day.

Key to convicting al-Megrahi was the testimony of a Malta shopkeeper who identified him as having bought a man's shirt in his store. Scraps of the garment were found wrapped around the timing device.

However, a Scottish judicial body that carried out a major review of the evidence cast doubt on the shopowner's identification of al-Megrahi and said there was evidence the shirt was purchased on a day when al-Megrahi was not in Malta.

Al-Megrahi's lawyers also claimed that British and U.S. authorities tampered with evidence, disregarded witness statements and steered investigators away from suggestions the bombing was an Iranian-financed plot carried out by Palestinians to avenge the shooting down of a civilian Iranian airliner by a U.S. warship. The airliner went down, killing some 290 people, several months before the Lockerbie bombing. The judicial body, however, discounted theories of intentional misdirection.

"I had most to gain and nothing to lose about the whole truth coming out — until my diagnosis of cancer," al-Megrahi said in a statement after his release. "To those victims' relatives who can bear to hear me say this, they continue to have my sincere sympathy for the unimaginable loss that they have suffered."