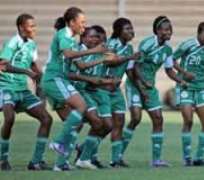 THREE first half goals were all the Nigeria U-20 Women National team, Falconets, needed to silence their host, Congo DR, yesterday to qualify for this year's FIFA U-20 Women World Cup taking place in Japan.

The Nigerians, who had a 4-0 advantage from the first leg played in Abeokuta two weeks ago, got into their stride early with Ngozi Okobi scoring in the 8th minute.

The celebration that greeted the goal had not died down when Delta Queens' top striker, Desire Oparanozie, registered her name on the score sheet in the 13th minute.

Realising that the Nigerians might humiliate them in front of their fans, the Congolese opted for defensive play. It failed to work as Francesca Ordega increased the tally in the 23rd minute.

On arrival in Kinshasa on Wednesday, Ordega, who is Nigeria's leading goal scorer in the qualifier, promised to break the hearts of the Congolese in front of their home fans.

The Gboko-born forward, who had three goals to her credit before yesterday's encounter said she would do everything possible to net her fourth in the African qualifiers.

She had scored two against Zimbabwe and one against the Congolese in Abeokuta two weeks ago.

With the 3-0 win yesterday, the Falconets qualified for the World Cup on 7-0 aggregate, who were finalists in the 2008 edition in Germany.

At the end of the encounter yesterday, the Falconets' technical crew led by coach Edwin Okon and former Super Falcons team captain, Florence Omagbemi, were full of praises for the girls for doing the nation proud.

An elated Okon declared yesterday that the girls would embark on one-month break before reconvening for the preparation for the World Cup.

It would be recalled that Congo DR accounted for the elimination of Lioness of Cameroun and Mali from the race.