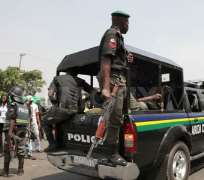 Briefing journalists on Thursday in Asaba while parading the suspects, Aduba said that the robbers caught the Police unawares with the use of rocket launchers, rocket-propelled grenade and assault rifles.

According to Aduba, “a crack team of detectives from Ogwashi-uku Divisional Police Headquarters trailed a band of robbers/kidnappers numbering more than 30 to their hideout in Igbodo, in Ika North-East local government area of the state, where they were engaged in a gun battle.”

He said the robbers made a detour to Ibusa, where they carried out another raid, but the Police successfully re-enforced and mobilised its personnel to counter the robbers, gunning down four of the robbers and arresting three, while others escaped with bullet wounds.

Aduba expressed regrets that the Police lost eight of its men during the gun duel, despite containing the rampaging robbers with the use of Armoured Personal Carrier (APC).

“The causalities include Divisional Police Officer, Abraka, SP Steven Chigbufue, and three of his men who were on their way to Asaba; and one officer from Ibusa Division. Other casualties include one military officer attached to Joint Patrol and a female traveller. On the whole, six policemen were killed, bringing the casualty figure to eight,” he said.

“Four of the robbers were gunned down and the arrested suspects are helping the Police with useful information. Items recovered from the robbers include one rocket launcher, one rocket-propelled grenade, five AK-47 riffles, one 9mm Zastave pistol and 11 rounds of live ammunition.”