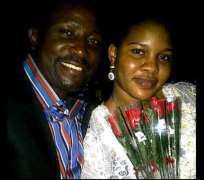 Barely 2 months and a half after top Yoruba actress,Mosun Filani had her traditional wedding ceremony in Ibadan,Oyo State,the beautiful Ekiti indigene had her white church wedding at Graceville Chapel,129,Awolowo Way,Ikeja,Lagos.

That was 2 Sundays back.At the event,with the way Mosun looked,she must have been pregnant.She was fuller and more chubby.

She finalized the marriage rite at the new generation church on Sunday 29th of April.

It was an unusual wedding ceremony conducted during normal church service.

There were no bridal train,no parents.It was during normal Sunday service.

The couple just came to the altar and signed the forms,after which they did their Thanksgiving.

The light skinned beauty has been in an elated mood since she formally took her lover of many years,Kayode Oduoye,to her parents two and half months back,marking the 1st step of marital rites.

The Ibadan-based actress who is very popular in the industry has had a celebrated romance with Kayode,CEO,Shalom Kay Productions over the years,but both kept the hush hush romance under wrap even though it was said to have caused a lot of controversy for the actress,especially since the dark skinned guy already has 2 wives,some even say 3.

As a result of his marital status,no one ever imagined a marriage between the duo and that was why it took many by surprise on February 19th,2012 when the Lagos-based businessman and Chairman of Shalom Kay Group of Companies,took his close relatives,family members and friends to Mosun's family house in Ibandan,Oyo State to formally ask for her hand in marriage.

The low key Introduction and engagement which commenced at noon on Sunday was a very private one,it was held inside Mosun's family house sitting room at Alakia area on the outskirt of Ibadan.