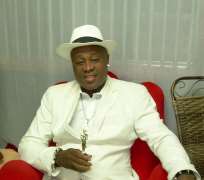 National Edifice Magazine which will hit the newsstand in the middle of May will be showcasing sales, leasing and renting of property and dealing with issues that affect property and the environment. The magazine will also covergeneral sales of all forms of merchandise, advertisement and celebrity profile. Members of the public will be able to advertise the saleof their used items and publicize their requests for things they desire to buy. The magazine which is based in Ikeja, Lagos and has an Internet version (currently under construction) whichwill be available in major world cities.

Prof. Bob Ejike is well known as a Nollywood actor and musician, however few people still remember that he started writing very early in life with Drum Magazine where he shared the Short Story page with Ben Okri, thereafter, he scripted dramas for television stations nationwide and wrote the NAFEST award-winning movie, Echoes of Wrath, a precursor to Nollywood.

Bob Ejike was educated in Government College Umuahia and trained in University of Port Harcourt where he studied under great writers like Professor Ola Rotimi, Captain Elechi Amadi, I.N.C Aniebo, and Chidi Amuta, to mention but a few.

After his NYSC, Ejike worked with Ken Saro-Wiwa,s Basi and Co as an actor and scriptwriter before travelling abroad for further studies. He ultimately became a scholar and lecturer at The Polytechnic of Milan and Universita Popolare, Rome, and spent much of his spare time promoting Nigerian arts and movies. He combined teaching with freelance journalism and anchored columns for The Sunday Sun and some international journals. Bob Ejike, who also presented NTA's programme Tropical Rhythms, is also a talented lyricist and music composer and his music has taken him to several countries of Europe, East Africa and the Middle East, where he is popularly acclaimed as Nigeria's Culture Ambassador.

Ejike has worked as consultant to a European embassy and presidency; his theme music helped Governor Bola Tinubu of Lagos State get reelected and he strategized for Hon. Dr Orji UzorKalu's presidential campaign. Ejike who has starred in 40 Nigerian films, spent the last six years in Uganda working in the Ugawood Project, a Ugandan government initiative aimed at developing indigenous motion picture in the East African country. His books include Weapons of Biafra, The Ambassador, and Property of the gods. He is bringing all these experiences to the benefit of the Nigerian populace through the National Edifice where he will be working with a carefully selected team of highly skilled and talented Nigerian journalists, marketers and public relations experts.