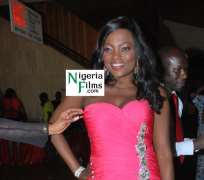 When it comes to wowing at the red carpets, Funke Akindele has started having a good day on it compared to back then.

At a recent event, Jenifa, as she is also fondly called, adored the red carpet but someone almost messed it up with a hand that has been identified as a female's.

A part of the act was caught in camera while attempting to do what we don't know.

But the question now is, what was she trying to when her hand was caught almost touching a part of our 'Sulia's' watermelon while posing on the red carpet? Hian!!