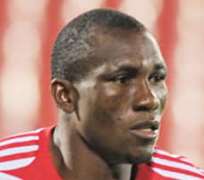 Warri Wolves' defence marshal, Ike ThankGod, has vowed that his side is not afraid of trading tackles with the Black Leopards in tomorrow's CAF Confederation Cup return leg third round fixture inside the Peter Mokaba Stadium in Polokwane, South Africa.

The South African side lost the first leg 3¬-1 at the Warri Township Stadium a fortnight ago and needs to win tomorrow's reverse fixture by, at least, 2-0 to progress in the tournament at the expense of the Nigerian team. But ThankGod told League Unlimited that he would personally make things difficult for the host side, popularly known as Didoda Duvha, meaning 'The day will come'.

'There's no way Black Leopards can beat us 2-0 in South Africa. In fact, I shall personally make sure that they won't score at all. We shall play a watertight defence to make things very difficult for them. The worst result we would get in South Africa is a draw. Black Leopards cannot stop our dream of winning the CAF Confederation Cup this year,' the former Heartland of Owerri defender said.

Warri Wolves' defence line must pay close attention to Black Leopards' Nigeria-born forward, Joshua Obaje. The former Heartland of Owerri aggressive striker was a handful for the Thank God-marshaled back line in the first leg in Warri. Credit must go to him for setting up the visitors' consolation goal during the first leg encounter.

Meanwhile, striker Jude Aneke is upbeat that he would be fit for tomorrow's game. The reigning goal king in the Nigerian domestic league, who picked up a knock midway in the first half of the first leg two weeks ago, disclosed that he had returned to training and was only working on his fitness level ahead of tomorrow's game.