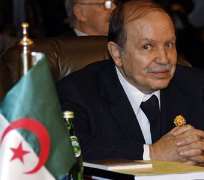 In Algeria, even those who owe their livelihoods to the government find it hard to muster enthusiasm for a parliamentary election this week that few believe will change anything.

"If my father rose from his grave and told me to vote, I wouldn't do it," one civil servant said as he shared an elevator at a government ministry with two strangers.

The election on May 10 is turning out to be not so much a contest between political parties as between those who think people should vote and those who don't want to.

A big turnout matters greatly to the authorities in this energy-producing north African state.

Under pressure to change after the "Arab Spring" upheavals in neighbouring countries, they are casting the election as an important step towards democratic reform, and need people to vote in large numbers to lend it legitimacy.

But a large segment of the population is mistrustful of elections which, as the president himself has admitted, have been unfair in the past.

These people believe this week's vote will be no different and will either boycott it or - more likely - just not bother to show up.

"Voter turnout will be the main wild card," said Riccardo Fabiani, North Africa analyst with private thinktank Eurasia Group. "The fragile credibility of the Algerian regime means that many voters are likely to continue to abstain."

The rows of notice-boards put up in the streets to accommodate election posters have become a battleground between the pro-voting camp and those who favour abstaining.

Party workers paste up their posters, and by the next morning, many have been ripped down. It is a routine repeated almost every 24 hours.

In the El Biar district of Algiers, the only notice-boards that were untouched were on poles about 2.5 metres (8 ft) high, reachable only on a ladder.

WHAT DOES IT MEAN FOR ME?
Many people don't see how the election will affect their day-to-day preoccupations around unemployment, periodic shortages of goods, poor housing and high prices.

In several neighbourhoods of the capital, people scrawled the price of potatoes, which tripled at one point last month, over the posters.

"We are not interested in the election campaign. I do not trust them and I will not vote," said Sofiane Medjehedine, an unemployed man taking part in a protest rally organised by an association for jobless people in central Algiers.

In Hadjout, 80 km (50 miles) west of the capital, the Front de Liberation Nationale, the country's biggest party, whose honorary head is the president, held an election gathering in a vocational training centre.

A queue formed outside a gas station about 100 metres away after rumours spread about a fuel shortage.

"They are not even able to provide us with fuel," said a man in the queue, who gave his name as Ahmed.

"They remember us only when elections approach. Where have they been over the past months? They come to our district once every five years."

Thursday's vote is expected to be the fairest and most transparent in two decades. Twice as many parties are taking part as in the last election five years ago and the European Union is sending observers for the first time.

With no reliable opinion polls, it is hard to judge how many people will ultimately abstain. Because of efforts to make the election more fair, the turnout may not be as low as last time, when it was 35 percent. A figure even close to that would be a rebuke to the authorities and their pledge to re-connect with voters, however.

The authorities are sufficiently worried that they have sent out mass text messages reminding people that voting is their duty as citizens. On state-run television, advertising spots exhort people to "make a date for May 10."

One Muslim cleric issued a fatwa, or religious edict, saying God will punish those who abstain.

WHY NOT VOTE?
But it is difficult to fight the apathy and indifference of many in the voting population.

For one thing, the parliament has very limited powers under Algeria's constitution. For another, after decades of rigged elections, it is likely to take more than one credible election to restore people's confidence.

It was the military-backed government's annulment of a parliamentary election in 1991, which a hardline Islamist movement was poised to win, that sparked fighting between Islamist insurgents and state security which has killed an estimated 200,000 people. The conflict is still going on but has subsided considerably.

One prominent opposition party, the Rally for Culture and Democracy (RCD), has decided not to run in the election.

"We took part in the 2007 parliamentary election, but we have seen that members of parliament have no power," RCD president, Mohcine Belabbas, told Reuters.

"There will be no fair election. There is only a facade of pluralism. Our activists have been intimidated when they came out to call for boycott," said Belabbas.

The campaign for a protest boycott has not gained huge momentum, however.

"I will vote because I think those calling for a boycott want just to settle a score with the government for political reasons," said Mohamed Bachi, a 23-year-old student at Algiers political sciences institute.

President Abdelaziz Bouteflika has appealed to people to turn out.

"We expect voters to mobilise," he said in a television address. "They shouldn't forget that they have the responsibility ... for deciding the destiny of the country."

Yet even outside Bouteflika's residence in one of Algiers' most exclusive residential streets, some election posters had been torn from a board last week, right under the eyes of a round-the-clock police checkpoint.