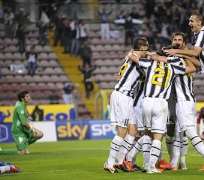 Juventus clinched their first Italian title for nine seasons on Sunday but not until Serie A had dished up its customary climactic mix of chaos, drama and controversy.

Unbeaten Juventus comfortably dispatched Cagliari 2-0 in a match which the Sardinians hosted in Trieste - closer to Zagreb than their own island base - and featured a last minute change in kickoff times.

The title was assured when AC Milan, the only team who could catch them, lost 4-2 to bitter rivals Inter in a match which featured three penalties, a hat-trick for Diego Milito, two goals for Zlatan Ibrahimovic and yet another ghost goal.

The final whistle in Trieste was greeted by an unruly pitch invasion by Juventus fans and the champions quickly re-ignited the controversy over how many titles they had won.

Officially, it was Juventus' 28th Serie A title - an Italian record - yet Juve players and officials were quick to bring up the Calciopoli match-fixing scandal which resulted in them being stripped of the 2005 and 2006 titles.

""It's our 30th Scudetto," Juventus sporting director Giuseppe Marotta told television reporters after his team moved four points clear of Milan with one game to play.

Goalkeeper Gianluigi Buffon, one of several players who went down to Serie B when Juventus were demoted as a result of Calciopoli, joined in the debate.

Buffon has had a superb season, rediscovering the form which made him one of the world's top goalkeepers as Juventus were revitalized in the first season under the leadership of their former midfielder Antonio Conte.

Milan were left to reflect on the possible turning point of the title race in February, when they had a goal disallowed against Juventus because match officials failed to see that it had crossed the line.

Milan were leading 1-0 and in complete control when Sulley Muntari headed the ball well over the line in the Juve goal before Buffon clawed it away.

Juve hit back in the second half to draw 1-1.
A few weeks later, Milan had another goal disallowed in similar circumstances at Catania, costing them another two points after the game ended 1-1.

There was more refereering controversy in Sunday's derby at San Siro as Inter, despite an unhappy season of their own, completed a double over Milan.

Milito gave Inter a 14th minute lead and they nearly had a second when Esteban Cambiasso header was clawed away by Milan goalkeeper Christian Abbiati amid suggestions the ball might have crossed the line.

A minute before the break Milan were awarded a hugely controversial penalty after Inter Milan goalkeeper Julio Cesar dived at the feet of Kevin-Prince Boateng and clearly got his hand to the ball.

Julio Cesar tried to Ibrahimvoic with some playground antics by sticking his tongue out distract penalty taker but it was to no avail as the Swede fired home the equaliser.

The volatile forward then took his Serie A tally to 28 goals with a superbly-taken second goal at the start of the second half to hand the defending champions a lifeline.

Milito had other ideas as he won and converted a penalty to level the scores, then fired home the third penalty of the night in the 79th minute after Alessandro Nesta had been harshly judged to have handled.

A brilliant fourth by Maicon completed the scoring and Inter celebrated as if they had won the title.

That goal also kicked off the celebrations in Trieste, where Cagliari have been forced to play their home games because of safety problems at the intimidating Stadio Sant'Elia.

The game had been due to take place in the afternoon but Juventus objected to playing earlier than Milan and the kickoff time was switched on Thursday.

Juventus can now complete the season unbeaten if they avoid defeat against Atlanta next Sunday and beat Napoli in the Italian Cup final on May 20.

Even that statistic, however, is grounds for controversy.

Juventus won their two-leg semi-final against Milan 4-3 on aggregate thanks to a 2-2 draw after extra-time in the second leg.

Milan claim that because they were leading 2-1 at the end of 90 minutes in the second match, that should be considered a defeat for Juventus.