THAT CLARION CALL ON IGBOS BY ANPP 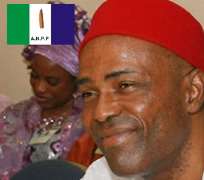 Recently, the All Nigeria Peoples Party (ANPP) called on Igbos to embrace it as an alternative political platform.

According to the leadership of the party which met at the country home of its national chairman, Dr. Ogbonnaya Onu, in Uburu in Ohaozara LGA in Ebonyi State, the time has come for Igbos to embrace the ANPP as the vehicle that will convey Igbos to their political destination.

In a communiqué issued at the end of the meeting and read by the party’s National Vice Chairman (South East), Dr. George Moghalu, leaders of the party described the ANPP as the only viable alternative political platform that can enable Igbos find accommodation in the mainstream politics of Nigeria.

It is important to state here that Igbos are the weeping child of Nigeria’s political family. Their predicament is aggravated by the fact that it is far away from entering the door of national politics.

This remains a major hindrance to whatever political mission it wants to realize now and in the near future. And this constitutes part of the cumulative factors that seem to have made Igbos politically irrelevant in the nation’s scheme of things. And it might remain so; until Igbos paddle their political voyage into a political party that is receptive to its ideals and aspirations – a party that has a national outlook and posture such as the ANPP.

If Igbos must be serious contenders for the presidency in 2015 and find relevance in the nation’s political landscape, then it has to stroll away from the political wilderness it presently finds itself. First, it must remove the regional tag it has pasted on itself. It should also resist the temptation to channel whatever political intention it has through political parties that has regional or ethnic leanings.

While one can say that the All Progressives Grand Alliance (APGA) is a platform to seek for political attention and recognition at a time Igbos needs a voice to echo its relevance in the dynamic politics of Nigeria, it will not be out of place if one says that APGA is Late Odumegwu Ojukwu’s political tool to bring Igbos together to locate its place or role at a time Nigeria was coming out of militarism and finding its feet in the new democratic space.

The political situation at that time made APGA a mere rallying point for Igbos. This has served its purpose and has presently outlived its usefulness. It therefore underscores the fact that a regional party with ethnic bias cannot be the right platform to actualize the national aspirations of a people.

The ruling Peoples Democratic Party (PDP) where most Igbo leaders have converged seem to be averse to give Igbos greater participatory role in the party to enable it advance its cause as a people. The party has not offered the opportunity for Igbos to actualize their political desires. Despite the enormous contributions of Igbo sons and daughters to the growth and development of that party, the PDP has continued to reward Igbos with political disappointments.

The party has severally disgraced Igbo leaders and has shown little or no visible sign to offer Igbos its might and size as the ruling party to actualize its motive of producing the country’s President.

First, in 1999, it disgraced one of its founding fathers and a great son of Igboland, Dr. Alex Ekwueme at the 1999 Jos Convention rejecting his presidential candidature in preference for an ex military non democrat like General Olusegun Obasanjo.

The party used the position of National Chairman which it zoned to the South East to make a caricature of great sons of Igboland. The first victim was Chief Vincent Ogbulafor who was forced to quit as National Chairman when he was caught in the web of a deadly conspiracy spawn by anti Igbo conspirators in the party.

Next was Dr. Okwesilieze Nwodo, one time governor of Enugu State, who was shoved aside as national chairman of the party on the floor of the Eagle Square, Abuja just to satisfy the inordinate ambition of the party’s emperor! He was also removed for advocating reforms that could usher in internal democracy into the party.

These sad events or developments in the past remains a major hindrance to whatever political mission Igbos want to realize now and in the near future. And this constitutes part of the cumulative factors that seem to have made Igbos politically irrelevant in the nation’s scheme of things. This might remain so; until Igbos paddle their political voyage into a political party that is receptive to its ideals and aspirations - a party that has a national outlook and posture.

The Yoruba nation can afford to encapsulate its political future in the Action Congress of Nigeria (ACN) because at the moment it is pre occupied with the desire of actualizing self determination.

This manifested recently at a summit organized by the party where its leaders unveiled instruments to signal its intention to actualize a Yoruba nation. This therefore shows that the political needs of the Igbos and that of the Yorubas differ. While Igbos desperately requires alliances and political handshakes across the Niger to re integrate into mainstream national politics, the Yorubas are content with the fact that having held the presidency for eight good years, there is nothing much more to be desired in the Nigerian polity, at least for now.

Historical political events in the country lend credence to the above postulations. And students of political history in the country will attest to the fact that the Yorubas have never believed in the politics of national interest. The late Obafemi Awolowo was never an apostle of one Nigeria. This influenced his regional brand of politics which he embedded in the Action Group- a party which propagated a political ideology that was consistent only with regional interests of the Yorubas.

This was why in 1999, despite the dominance of the then Alliance of Democracy (AD) in the South West, it was only a political platform with tentacles outside the South West that catapulted one of their sons, Chief Olusegun Obasanjo to the presidency.

In the second republic, the office of Vice President which was held by Dr. Alex Ekwueme was never realized on the platform of a regional political party. The Shagari/Ekwueme Presidency was propelled by the National Party of Nigeria (NPN) which was a national political party that had presence both in the North and the South.

Based on the prevailing political circumstances in the country, it appears the ANPP remains the only national political party Igbos can really find political accommodation because of its liberal ideology and national outlook. It is a party that has no ethic bias irrespective of the fact that its stronghold is in the North.

The circumstances which led to their eventual departure from the party are better left for these great sons and daughters of Igbos to explain.

Presently, the ANPP is undergoing a rebuilding process championed by the party’s national leadership led by its national chairman and former Governor of Old Abia State, Dr. Ogbonnaya Onu. Onu has strived to make the ANPP a virile national political party not only capable of wining elections, but a party that is willing to accommodate all Nigerians, particularly Igbo’s in its fold.

The re building process has showed signs of success. The emergence of Hon. Innocent Edeh from Ebonyi State as a member of the House of Representatives on the party’s platform is an indication that the party has began to earn acceptance once again in Igbo land.

The party also made considerable presence in the last general elections in some States such as Ebonyi and Imo States where its governorship candidates made appreciable impact at the polls.

From the foregoing, it is clear that the ANPP is better placed to convey Igbos to their desired political destination to any other political party in the country. In a complex and multi ethnic nation such as Nigeria, the ANPP offers Igbos the right platform to be accommodated as the next political dispensation draws near.