The Lowdown On Where To Break Up 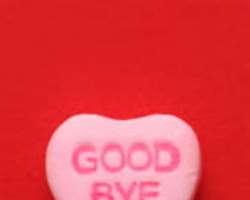 Breaking up is never a pleasant experience. The relationship moves from “You are awesome, let's spend oodles of time together,” to “Actually, I'm not very fond of you, let's never see each other again.” Tears fall, fists fly, hurtful things are said—and that's when a breakup goes well. One of the most important things to decide when breaking up is where it will happen. The right place can help a break up go smoothly. The wrong place and you can wind up crying alone on the side of the New Jersey Turnpike. Not that that's ever happened to me. In general, you're looking for neutral territory, a transient place that will not hold the memory of your breakup. Here are four places to avoid and four places to go to have the dreaded breakup conversation.

Transportation
Never break up on a boat. If things go south, you're trapped on the boat and there is no escape. A friend of mine once broke up on a Circle Line Cruise in New York City. Her new ex followed her around the poop deck for two hours crying and asking why. She debated jumping into the Hudson River.

Try to break up on a city train. The subway, the El, BART, the metro—any light rail system will do. If things go south, you can jump off at any station. The close proximity of people should keep things fairly calm. But if you do jump off, be prepared for an onslaught of text messages and voicemails.

Restaurants
Never break up in a restaurant you love. The idea of feeling homey and cared for may be inviting, but you don't want to associate a place you love with a bad breakup. You're already losing your boyfriend; do you really want to lose that Carpaccio appetizer as well?

Try to break up in a restaurant you don't love. You don't want to associate the breakup with anything you enjoy on a daily or weekly basis. Find a restaurant outside your neighborhood, somewhere you don't often go. Make sure it serves food you don't particularly like. My brother once broke up in an Indian restaurant and couldn't eat Indian food for ten years.

Apartments
Never break up in your own apartment. Like a favorite restaurant, you don't want memories of your breakup to haunt your walls. And like a boat, you're trapped there. Even if you leave, he could still be there when you return. And if you like a strong, virile man, he might break something.

Addendum” Never break up in his parent's apartment. A friend of mine once thought this tactic would keep her boyfriend level headed. She ended up sitting in the living room justifying her decision to his entire family.

Try to break up in a friend's apartment. It's neutral territory and you can call in reinforcements. I heard a story once about a woman who kept her friend on cell phone stand by. With the push of a button she sent a pre-written text to her friend who promptly made sure to “come home.” That was the end of that breakup.

The best part about this is you get to immediately download to your friend.

Public Spaces
Never break up in a public park. It might seem like a good idea, but public parks are too open-ended. There is no door to close, no stop to hop off at, no actual space to leave. Your new ex can just keep following you.

While you might think a public park would serve to keep tempers cool, it can have the opposite affect. Very often, public parks are empty, creating no social pressure to behave. Other times, parks are so crowded they create the anonymity effect; no one is paying attention to what anyone is doing.

Addendum: Public parks often attract happy lovers. You don't want to break up with your partner and have him look around and see nothing but happy couples.

Try to break up in a museum or high-end bar. These are what I call classy places. They are public, but there is a level of decorum associated with them. You can't raise your voice in a museum. You don't want to bust out crying in an oak-paneled bar. The space is a cue to behave as a mature adult and everyone around you reinforces that.

To go along with earlier advice, do not choose a favorite bar and if you love Picasso, do not break up anywhere near the Picasso room at the Modern.

Of course, breakups don't always go as planned and aren't always scheduled. But a little pre-planning might just help you avoid a big scene, an awkward departure, and broken furniture. The same can't be said for the broken hearts.