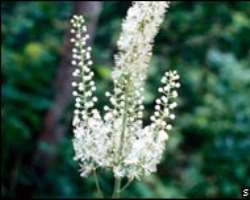 Black cohosh can cause serious side effects
Listen to article

And some 'natural' treatments, like black cohosh, can cause serious harm, says the Drugs and Therapeutics Bulletin (DTB).

But herbalists said a lack of proof did not mean the treatments lacked effect.

Polls suggest 40% of UK women have used complementary and alternative therapies for their menopausal symptoms.

The DTB says little good quality evidence on the effectiveness of these herbal medicines, or how they might react with prescription medicines is available.

There was some clinical trial data on black cohosh, but the results were "equivocal", with some studies suggesting that the remedy works well, while others suggested that it did not relieve symptoms effectively.

And, in general, the safety of herbal remedies has been under researched, which is a major concern given that these products are often assumed to be "safe" just on the grounds that they are "natural," says the DTB.

Black cohosh in particular has been linked with liver damage, although this is rare.

Published studies are often poorly designed, include too few participants, or don't last long enough to be of real value, and the chemical make-up of various preparations of the same herb may differ, which can make it difficult to compare trial results, says the DTB.

"Many patients do not tell their doctors that they are taking herbs. Healthcare professionals should ask women routinely if they are taking any such products," says the DTB.

A survey of more than 1,000 women, published in Menopause International in 2007, found two-fifths had tried complementary and alternative therapies for menopausal symptoms such as hot flushes and night sweats.

Jenny Jones of the Herb Society said: "A lack of evidence does not necessarily mean a lack of effect. Not much clinical research has been done and we do need more. But there is not the funding to do this type of work.

"As a practitioner I can tell you these remedies do work for some women."

Gynaecologist Dr Nick Panay, of the British Menopause Society, said: "Some women will find herbal remedies beneficial. We have been studying red clover isoflavones and have found they have a small benefit above placebo.

"But just because these are alternative treatments it doesn't mean they are entirely safe. Any treatment can carry side effects."

After April 2011, all over-the-counter herbal medicines will have to be made to assured standards of safety, quality and patient information.

An Ipsos MORI poll for the agency shows that 77% of adults agree that it is important that herbal medicines are regulated.