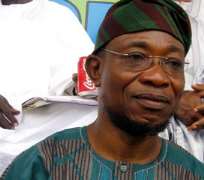 LAGOS, April 11, (THEWILL) - The Action Congress of Nigeria (ACN) has raised alarm over “credible threats” to the life of governor of Osun State, Rauf Aregbesola, claiming that a dastardly plot is being engineered by the Peoples Democratic Party (PDP) to destabilise the South-West and soften the ground for itself ahead of the 2015 general elections.

''The architects of this plot believe that unless the PDP destabilises the South-West and gets rid of the man they see as an implacable foe of their party, the President's putative plan to run for re-election in 2015 will be in jeopardy, especially as they are afraid — for reasons best known to them — that the President will not get the backing of the North-West and the North-East,” a Wednesday statement signed ACN’s by National Publicity Secretary, Alhaji Lai Mohammed, alleged.

“The first step in the dastardly plot is the fabrication of an 'intelligence report' alleging that Gov. Aregbesola is nursing a secessionist plan; that he now plays Osun's anthem in place of the national anthem; that he has since dispensed with the services of the SSS operatives attached to him and replaced them with

Islamic extremists called 'Tawun'; that he has officially changed the uniforms of secondary schools in Osun, made the wearing of hijab compulsory for female students and enforces that through Islamic militants; and that he has sent militants for revolutionary training in Cuba.”

'The statement further accused PDP of “cooking up” an intelligence report that stipulates the use of all legal and constitutional means to stop Aregbesola.

“Reading between lines, the measures being advocated in the report could only be impeachment (this is impossible considering the clean sweep of the PDP's footsteps in the state), creation of chaos and anarchy to pave the way for the imposition of a state of emergency in the state, or the final solution, which is physical elimination.”

The rest of the statement reads:
''There is no iota of truth in the allegations detailed in the so-called intelligence report engineered by the PDP. No SSS operative has been sent packing and the Governor neither has the intention nor possesses the authority to do so; no private militia is being trained anywhere except in the warped minds of the PDP desperadoes; and no uniform change or hijab-wearing law has been passed in the state.

''We hope that the plotters remember that since the First Republic,

all attempts to destabilise the South-West have ended with dire consequences for the nation. Also, such acts have always been motivated by the desperation to win federal elections. The ACN will therefore like to put the PDP and its collaborators on notice that it will guard its mandate in Osun and other states jealously

against political hawks. The so-called intelligence report should be shredded and packed in a dust bin where it belongs, because it is nothing but the PDP master-plan to destabilise Osun state in particular and the South-west region in general.

''We also warn the security and intelligence agencies to be independent and not to be used for political gains. They should put national interest above partisan or sectional interest, and remember that the PDP is not synonymous with the Nigerian nation. It is just a bull in china shop that will soon be ejected by the people’s votes.”