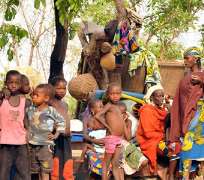 UYO, April 10, (THEWILL) - At least 3605 persons are currently taking refuge in four temporary camps in the south-south state of Cross River, following a violent clash earlier in the year between farmers and cattle herdsmen in Benue State. In all, the refugees are 905 men, 1499 women and 1201 children.

The National Emergency Management Agency (NEMA) made the disclosure on Tuesday, in a statement by its head of public relations, Yushau Shuaib, issued after a team from the agency visited the camps during the weekend to donate relief materials to the Internally Displaced Persons (IDPs).

The four camps accommodating the refugees, who are mostly Fulani nomads, are in Utanga, Obanliku Local Government area of the state.

During the weekend visit, the Director-General of NEMA, Muhammad Sani-Sidi, commended the Cross River State Government for accommodating the displaced persons and for providing borehole, tents and water tanks at the camps, despite an initial plan to repatriate them. He also urged the camp managers to ensure direct distribution of the items to the displaced people and promised to expedite action on their return to their respective settlements in Katsina Ala, Benue State upon the resolution of the conflict.

Visiting the camp weeks back, governor of the state, Liyel Imoke had spoken of his intention to repatriate them after consultations with their respective state governments — a plan he has obviously delayed.

The displaced Fulanis were also implored to maintain peace and cooperate with people of their host community.

Responding on behalf of the community, vice-chairman of Obanliku Local Government, Mrs. Margaret Achinikon noted that the council had no choice but to comply with the instruction of the state governor to create the temporary shelters. She expressed gratitude to the federal government and NEMA for providing the relief assistance.

However, Director-General of the Cross River State Emergency Management Agency (SEMA), Mr. Vincent Aquah warned that continued invasion of the camps by more refugees would require more facilities and support from the government.

Representative of the displaced persons, Mallam Wakili Abdullahi, thanked the communities for their support and promised to ensure peace in the camps.