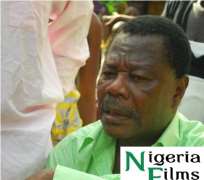 For some years now, the Nigerian movie industry, Nollywood and the entertainment sector at large has recorded many deaths and illness of popular practitioners. In the wake of the unfortunate occurrences, it has been widely speculated that most of the deaths are not natural, a reason why the entertainers have on about three occasions ran to famous pastors in the country for special prayers and deliverance.

While the argument of whether the deaths are natural or not rages on, respected thespian, Victor Edogun, writes on the deaths and illness rocking the movie industry and the entertainment industry at large. Enjoy it:

It should be safe to assert that the spate of deaths and illnesses in Nollywood and the Entertainment sector lately have been largely natural occurrences.

There is no gain-saying the fact that, also lately, within the same period, far too many deaths have occurred in our nation and around the world for any particular sector to be completely sacrosanct.

A high percentage of these deaths have been attributed to terminal diseases that affected vital organs of the body viz: Heart, Liver, Kidney, Lungs etc. From reports, majorly, no diabolical or mystical influences were fingered or deciphered. Meanwhile, many similar occurrences, to date, have been reported in the larger society and general citizenry making it difficult to clove them as isolated cases or as typical to the entertainment sector.

Instead, it seems that they have only appeared more rampant and uncommonly- high because of the social and universal conspicuousness of Entertainment and celebrated personalities.

Little wonder, William Shakespeare wrote in his famed literary Drama – Piece JULIUS CEASAR that “when Beggars die, there are no Comets seen, but the Heavens themselves blaze forth the death of Princes…so let it be with Ceasar…” This quote also underscores the premise that “Goldfish have no hiding place” – be it in life or in death.

This does not also belie the fact that being the cynosure of a watchful world and the object of consistent public scrutiny, it is easy to denigrate the fast- paced, sometimes unorthodox lifestyles of personalities in this sector, especially, as they exhibit certain negative indulgences which, instead of shielding or being a smokescreen, often-times, end up high- lighting their personal insecurities, weaknesses and individual phobia and struggles.