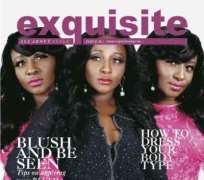 Sexy actress Ini Edo is one of the prettiest divas in Nollywood.

The sultry actress began her acting career in 2000.She was discovered by a producer at an audition.Impressed by Ini's performance,he gave her a role in his movie.

Ini gave the role her best and since then she has featured in dozens of movies to her credit.

The Akwa Ibom born actress has proven to be one of the most talented actresses in Nollywood.

Ini has remained very consistent. Apart from being a super star, the role interpreter is into real estate where she is also making a lot of money.

2008 to date have been years of endorsements for her and she was recently appointed as a United Nations Habitat Youth Envoy and has taken steps to positively impact society.

Her endorsement and deals with Globacom,Chi Plc as the Face of Chivita has helped her to maintain her profile and media visibility.

The sexy actress is on the cover of latest edition of Exquisite Magazine!

Ini gave amazing insights about her fabulous life including family, career and living her dreams.

As you can see she looks gorgeous and fabulous.