All I Need Is A Wife - Adjorlolo 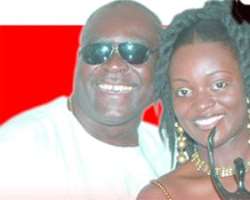 How Kofi Adjorlolo wishes that he had a woman he could call his wife by his side at this time that fame and fortune are beginning to knock on his door.

Doubtless, the 52-year-old popular movie actor, with two failed marriages behind him and two children to raise, has been through some rough times on his way up.

Anyone listening to Adjorlolo's life story would agree with him that indeed he deserves a break from the hustler that he has been for the most part of his adult life.

“I was a common civil servant earning a meagre salary at GBC. I worked as a radio presenter from 5 am to 5 pm and at certain times, I was compelled to do two jobs to make ends meet.

Then I met Metro TV's Talal Fattal. He was not into his own television station then but financially he sponsored us to come out with a programme, TV Market, by Media Number One”, he told this reporter last Wednesday.

That was one of the interventions which taught Adjorlolo that there was light at the end of the tunnel. “Now as an actor, thank God, I'm financially sound as compared to ten years ago. I'm not emphasising only on the monetary aspect but now I have the luxury of working under less pressure and less stress than I did in those days”, he said.

Being a successful actor has its own perculiar challenges. “For example,” he said, “I face the challenge of going to town and being immediately noticed. My private life has somewhat been very much reduced and I am obliged to relate to people in a particular way. But my biggest challenge and regret at the moment is not having a wife by my side.”

Recounting how he came into acting, Adjorlolo said it never occured to him that he will be an actor. “After my sixth form education, I became a professional musician playing with a number of bands including that of Nigeria's Victor Uwaifo of Joromi fame.

“In between my stay at GBC and working for Media Number One, I was offered a job as a Marketing Manager at Peace FM. After eight months, I was called by the current Ambassador to Benin, Mr E. K. Adu to assist in the establishment of another radio station, now Channel R.

“Later my cousin, Richard Prempeh, the Executive Producer of Taxi Driver asked me to write scripts for the series and possibly join the cast. That is how I entered acting.”

Sounding content with himself, Adjorlolo said judging from his ability to work his way up from the days of Taxi Driver to become one of the most sought after Ghanaian actors by the Nigerian film industry, “I'd say that I'm a good actor. After being in the industry for about six years the reactions I get from my fans and the general public has been encouraging.”

Talking about his film roles and how he gets them, he said he is not auditioned before he gets the roles. “Producers have realised that some of us can do more than we are usually given.

For instance, I did a comedy with Osuofia and Mr Ibu and it worked well, though I don't see myself as a comedian. I don't normally audition for roles at this stage of my career. I can play any role given to me and I do it to the best of my ability.”

Adjorlolo would not talk about the financial harvests that acting films in Nigeria has brought him but he disclosed that he was offered as much as $5,000 about a year and a half ago in Abuja to act in one film. “It was a wonderful experience”, he said.

In total, Adjorlolo has featured in about 60 movies within the last six years. These have included Ghanaian titles such as God Loves Prostitutes, Mummy's Daughter, My Mother's Heart, Official Prostitutes and Ghana-Nigeria collaborations such as My First Experience, Golden Adventure and Power of the Gods.

Wondering what he does in his free time? Kofi says he enjoys watching movies, playing his guitar and reading. He confesses that nothing will stand in his way to enjoy Akpele and Fetri detsi whenever he can.

He hates flying for many hours or riding in a speeding car. His favourite advice to everyone, especially the youth is “Don't give up on your dreams or be deterred by the challenges that come your way, but keep your eyes on what you want to achieve.”