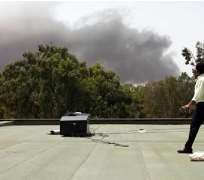 NATO has failed to properly investigate or provide compensation for civilian deaths caused by its air strikes during the seven-month operation in Libya that helped bring about the overthrow of Muammar Gaddafi, Amnesty International said on Monday.

Echoing similar criticisms aired this month by Russia, Amnesty said scores of Libyans, who were not involved in the conflict, had been killed or injured in NATO bombings but there had been no proper investigations into their deaths.

"They cannot now brush aside the deaths of scores of civilians with some vague statement of regret without properly investigating these deadly incidents."

Inquiries should determine whether any civilian casualties resulted from a breach of international law, and if so, those responsible should be brought to justice, Amnesty said.

The NATO military mission, authorized by the United Nations Security Council, began on March 31 last year with the aim of protecting civilians under attack or threat of attack.

NATO forces carried out some 26,000 sorties including some 9,600 strike missions and destroyed about 5,900 targets before operations ended on October 31.

PRECAUTIONS
Investigators for the U.N. Human Rights Council concluded earlier this month that NATO had caused civilian deaths but had taken extensive precautions to ensure civilians were not killed.

Amnesty agreed NATO had made significant efforts to minimize the risk of civilian casualties, through precision bombing and warning where strikes would occur.

However, the rights group said that did not absolve NATO from carrying out investigations into any deaths, or making reparations to victims or families of those killed.

Survivors and victims' relatives interviewed by Amnesty said they had never even been contacted by NATO.

Amnesty said NATO itself had documented 55 cases of civilians, including 16 children and 14 women, being killed in air strikes in Tripoli, Zlitan, Majer, Sirte and Brega, often in private homes with no clear evidence of any military purpose.

Another 34 people, including eight children, were killed in three separate attacks on two houses in Majer with no explanation for why they were targeted, Amnesty said.

NATO's most recent response to Amnesty stated it "deeply regretted any harm" its air strikes had caused but said it no longer had a mandate to carry out any activities in Libya.

Two weeks ago, Russia criticized the U.N. investigators for failing to adequately probe civilian deaths caused by NATO during last year's uprising, saying children and journalists had been killed.

"In our view, during that (NATO) campaign many violations of the standard of international law and human rights were committed, including the most important right, the right to life," said Maria Khodynskaya-Golenishcheva, a diplomat at the Russian mission to the U.N. in Geneva.

Russia had criticized NATO action which it said should have been limited to protecting civilians and not helping the overthrow of Gaddafi.