She dresses to win 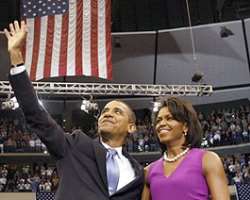 WHILE it's not often that Michelle Obama and Barbara Bush appear in the same sentence, there are those who think that, as Barack Obama's historic candidacy powers along, his wife seems to be borrowing from the playbook of the wife of Bush 41 and mother of Bush 43. We are talking here in terms of image and style.

Each woman has evinced a fondness for gobstopper fake pearls. Each has deployed humor to humanize her spouse. "Barbara Bush used sarcasm to bring down a notch or two the ego or the perceived removed-from-it-all image," that dogged her husband, George Bush, said Carl Sferrazza Anthony, who has written extensively about first ladies. Michelle Obama cracked wise about the guy who forgets to pick up his socks. Barbara Bush, the opinionated pillow-talk adviser, cloaked herself in the guise of a Connecticut matron.

Unlikely as it seems, Michelle Obama, the corporate lawyer with a big education, a bigger résumé and a history of high earnings, can sometimes appear to be tempering her own strong personality with a modernized version of another era's ladylike clothes.

It is possible, of course, at a time when campaign images are scrutinized by media sibyls as ardently as the entrails of birds were read by the ancients, to read too much into Michelle Obama's grooming and wardrobe. Yet people who track these things see in her simple sheaths and Donna Reed flip, her streamlined silhouette and fondness for pearls, parallels with former occupants of the White House, women like the first Bush and Jacqueline Kennedy.

"Everyone knows that people respond to the way you look when you run for office," André Leon Talley, an editor-at-large for Vogue, which featured Obama as an "It" girl in its April issue, said last week in an interview. "A black Camelot moment is the right moment for the Obamas," he added. "And so the faux pearls, the A-line dresses, the Jackie flip are obviously all part of how her image strategy has evolved."

When Obama and his wife triumphantly took the stage in St. Paul Tuesday to claim the Democratic presidential nomination, the candidate, dressed in one of the crisp, neutral suits that have made him a GQ darling, was momentarily upstaged by his wife, and not just because she knuckle-bumped him in front of the world.

What grabbed the eye was the sleeveless purple silk crepe sheath made for Obama by Maria Pinto, the former Geoffrey Beene assistant who has long been an Obama favorite. Simple in silhouette and, at about $900 retail, not the kind of garment most working-class voters can reasonably aspire to, the dress was immediately subject to water cooler dissection.

"When you are operating at a national and even global level," said Mikki Taylor, the beauty director and cover editor of Essence magazine, everything signifies. "No gesture is too small from now on," Taylor said. "It's all information. We're all taking something from this look."

What Taylor read in Obama's appearance on Tuesday, she said, was a message that she is primed to become first lady, although not necessarily first hostess. "Every woman I talked to was saying how she has this confidence that is empowered," Taylor said. "The purple dress, the legs that I have to believe were bare and not wearing the prerequisite suntan stockings, all say, 'I'm here to do business.' "

If the gumball pearls were a retro wink at traditional decorum, they still read as anything but wifely jewels. "Those are not little 'Breakfast at Tiffany's' pearls," Taylor said. "Those are large pearls. Those are pearls you have to deal with." It could be, of course, that voters won't warm up to a pearls-you-have-to-deal-with personality.

The belt Michelle Obama wore was another signature accessory, something Vanity Fair noted when adding her last year to its International Best-Dressed List. "That Azzedine Alaïa belt that she wore 15-plus months ago signified to me that this woman had an independent and strong and distinct fashion sense," said Amy Fine Collins, a special correspondent at Vanity Fair and a guardian of the 68-year-old list.

But it was particularly the color Michelle Obama chose Tuesday night that seemed symbolically rich, even if its message may have been so subtle as to be subliminal.

"I don't know if that's something they consciously thought about," said Anthony, referring to the fact that purple is, as every schoolchild knows, created by mixing the primary colors red and blue.

Of course, political wives have always cut their clothes to suit their husband's politics; as far back as the Harding presidency, chromatic manipulations were in play. "The color thing predates television," said Anthony, noting the association between Warren Harding's wife, Florence, and a pure delphinium blue she favored, a symbolism that permeated a 1920 campaign largely predicated on the sense that, as Malcolm Gladwell wrote in "Blink," Harding was considered White House timber less on account of his qualifications than because he appeared presidential.

Harding didn't win his landslide victory over his Democratic opponent, James M. Cox, because of Harding blue, of course, any more than Nancy Reagan's "Reagan Red" Adolfo suits put Ronald Reagan in office, or Rosalynn Carter's green shirt dresses sold her husband's folksy platform to a populace largely unfamiliar with the man. But the clothes underscored the message, and that never hurts.

Yet, said Hamish Bowles, the Vogue editor who assembled the clothes for the Jacqueline Kennedy show at the Met in 2001, the power of clothes "that look dramatic in newspapers and photographs" can boost a politician's image, as Kennedy demonstrated throughout her husband's campaign and presidency.

"As Jackie did, the way Obama presents herself sends out messages that are subliminal and sometimes overt," Bowles said. This is not merely a matter of conjuring Camelot with a updated version of an iconic Kenneth coiffure. Hair matters, as anyone knows who has tracked the unending styling travails of a woman once known as "Hairband Hillary."

WHILE Kennedy relied on a carefully assembled coterie of wealthy women — Jayne Wrightsman, Bunny Mellon, Nicole Alphand— to advise her on matters of style, Michelle Obama apparently pulls off the feat of getting dressed on her own.

"To the best of my knowledge, she does not use a stylist," said Obama's spokeswoman, Katie McCormick Lelyveld, although the candidate's wife is known to have ties to the designer Pinto and to Ikram Goldman, the owner of Ikram, a Chicago specialty store. (Both declined to speak about the relationship.)

"What's important here is that we're not starting from zero with Michelle Obama," said Collins of Vanity Fair. "I'm sure she's being advised. But there's nothing imposed on her that isn't generated by who she is. She has a very definite sense of herself."