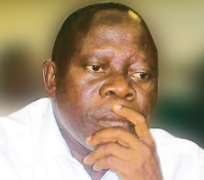 Oshiomhole
For the benefit of those who are not conversant with the infantile indulgence of building sandcastles at seaside picnics or at the village playground, their construction tickles the aesthetic imagination of little kids. And as a 'monument' whose resilience is suspect, a conscious or unconscious kick; a gush of wind or tidal waves can permanently obliterate the 'fine' sandcastle. What a waste!

The analogy of a resurgent Edo PDP and the parable of The Sandcastle By The Sea is very apt when considered within the context of subterranean posturings and permutations going on within the top hierarchy and other stakeholders of the party as to who will fly the ensign of the party in the July 14, 2012 Governorship Election. Some of these permutations are in the best interest of the PDP while others are patently diabolic and self-serving.

Allocating power
Politics involves competing interests, ideas and persons for power, position and influence. It is almost impossible to satisfy the aspirations of everyone in contention. It is even moreso for a vibrant party like the PDP with a teeming population of qualified, skilled, educated and intelligent members angling for the few elective and appointive positions available - in this case, the governorship of the state.

It is true that a party's success and superiority over its rivals is, among other indices, strongly predicated on its numerical strength. The other critical index is unwavering loyalty and unity of purpose which, in addition to its numerical strength, drives a party to greater heights of achievement.

The under current of schemings, permutations and posturings being played out by a select group of party 'chieftains' in Edo State PDP points to the fact that the loss of power in 2008 and the attendant shame, humiliation and mass defection of PDP's rank and file in the state appears lost in the dark recesses of these schemers' minds. We have suddenly forgotten how we got into this sorry state that virtually translated Edo PDP into an ACN footmat.

Edo PDP shot itself on the foot through the intra-party squabbles that started in 2003 and snowballed into a raging inferno that almost consumed the party after the ACN judicial coup of November 11, 2008.

It appears lost on the proponents of the self-destructive scheme of foisting an' anointed candidate' on hapless partymen and women. The PDP in Edo State was resuscitated and nursed back to its present state by a crop of dedicated, diligent, unusually loyal and forward-looking party men and women when it was the fashion to defect to the ACN and be relevant.

These committed party faithfuls spent their hard-earned money and time to restore the glory of the PDP in the face of intimidations, oppression and insolence exhibited by the ACN that was bent on routing the PDP in Edo State.

For a clique within the party to come out with a voodoo political permutation that only a particular aspirant from a particular senatorial district has the magic wand to regain Government House, Benin City for the PDP, is sheer wishful thinking. Yes, Edo PDP will be building a sandcastle very close to a raging and tempestuous tidal wave. It will take the party back to the political quagmire it has experienced since November 11, 2008. It may even be worse!

The people's specification of those leadership values and qualities that will restore their confidence that government works for the benefit and good of the people, is that of the leader who will act as an agent of positive change. The one who will create the enabling and conducive environment for industry and commerce to thrive; show enough commitment and passion for the overall sustainable development of the state; possess a fat dossier of verifiable services on the state and national stages; have the ability to initiate, drive and sustain the momentum of change.

The PDP in Edo State will not be building sandcastles in its drive to take Oshiomhole's job if the top hierarchy of the party does not impose anyone as the candidate of the PDP on Saturday, February 25, 2012.

It is not the leadership that a particular cabal in PDP wants that matters but the one the people of Edo State needs.

For a state that has produced leaders and pacesetters in national, continental and global governance, academic, industry and commerce, literary and theatrical arts, jurisprudence and other professions, Edo State needs that quintessential, mercurial, clean and well-experienced leader whose whole persona radiates and encapsulates calm not impetuousity; maturity not irascibleness; calculation not disorganisation; a clean slate not a baggage of indiscretions etc. Leadership is positivity. What limits a leader is lack of character and decisiveness.

Rather than allow a powerful cabal to conjour a PDP governorship candidate on Saturday, February 25, 2012, the delegates should be allowed to:

Have an unwavering attachment to the social contract they are entering into with the aspirants/candidate into behalf of other partymen and women.

Express their franchise to choose a candidate who will use his position for the greater interest of all Edolites and not the narrow personal or group interests of a few persons.

Inquire, query and assess the moral, business, professional, social, political and other related credentials of those who intend to govern them so that all the efforts of committed party faithful, at all levels, since late 2008 will not be in vain.

If the top echelon of the Edo state chapter of the Peoples Democratic Party does not get it right on Saturday, February 25, 2012 by allowing the expressed wishes of the delegates to reign supreme, then it will be offering a ready prescription for failure on Saturday, July 14, 2012 - the day that has been tentatively-scheduled for the governorship election in Edo State. A case in point is the willful disenfranchisement of some partymen and women in many wards in Edo South, who wanted to be delegates because it was feared that will not vote for their anointed one.

If we get it right, then Edo PDP will be right on the path to its winning ways.