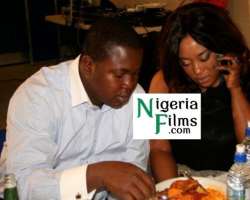 On Saturday, February 12, 2012, Nollywoodgists.com exclusively reported the secret wedding between young up and coming actor, Babatunde Bernard, who is known as Baba Tee, and celebrity journalist, Yetunde Oduwole.

The news generated a lot of reactions from the public, especially because of the age gap between the two lovers. Baba Tee is reported to be about 32, while Yetunde is already 41.

In a reaction to the criticisms their recent union has gotten, Yetunde, a mother of two wrote in her facebook page with this update;

"Whatever you do, always put God first! Don't ever fight any battle yourself because you will not win!

The battle is the Lord's and He is the only one that can fight the good fight! That is why I am not moved when lies are written about me and told about my person.

Because I know my God always vindicates me, He puts me above my enemies. I marvel at how faithful God is to me. I got a surprise I must share with everyone. It is to teach you not to fight your battles yourself.

You all know my story that I have been separated from the man I married in 1998. You should also know the various lies he has told about me. Thank God I became wise early enough to have left it all to God.

For 7 years, I have been a struggling woman, a mother of two who fends for herself and her kids all alone without a man to help out. For the 7 years, I didn't get a divorce even though he divorced me without me knowing so he could marry another woman.

My ex husband, who had waged war against me, ran his mouth endlessly, ran away from his responsibilities and divorced me without me knowing, just to be with another woman, came begging for forgiveness!

He actually commended me for being a strong woman who has been there for her kids.

Dear friends, I was weeping! not because he begged, but because God has fought the battle for me! Even if it tarries, God's words will surely come to pass!

This is a big lesson for all! Another thing is, whatever makes u happy, do it! Life is too short. I have lost loads of young people to death and that has taught me to embrace what gives me joy.

I don't want to die an unhappy woman. That is why I don't really bother my brain about way people say about me. I am a gold fish! It will be boring if I hear only good things said about me!

I have been called a lesbian just because they haven't been able to point out who I am dating, but please raise your hand up out there if you are my lesbian lover, tell the world!

I have been called a whore, if I have slept with a legion of men out there, I demand that you all raise your hands! I know deep down me that I am as decent as they come.

I even heard they said I had an abortion for someone recently. LOL, isn't that legal in the UK? And it is even free! I just might be saving the planet for sustainability! And, I am an adult! Cant help laughing! Is that news? I am entitled to my happiness.

No one was there for me in my loneliest days, my weeping nights, when I had to go hungry and when I single handedly catered for my kids.

Now that God has sent a person that sees beyond my faults and is ready to go the long haul for me, and doesn't care about my past or whatever damage people cause, tongues are wagging!

The world is sad if you have a little happiness, how terrible! If you are the one who says her ex husband wont allow her remarry, he will destroy her with the pen…time to shut up!!!!!

He has sworn to support whoever would make me happy and he is deeply sorry for all he has done. Who am I not to obey God? He has told me to forgive, and that I must do so I can be forgiven myself.

He has given me victory over my enemies. That's what matters to me. I don't care about anybody's opposite feelings, God approves my happiness, not humans.

So, dear ex husband, thanks for swallowing your pride of many years and obeying God. It hurts, but I forgive u. I am glad u know Yetunde has been and will always be a good wife.

I wish u d best in life just like u wish me. Thank u Jesus for making me live to say this testimony.