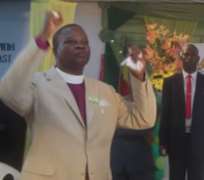 Rhema Bishop Taiwo Akinola and Prophet Abiara at the convention

The joy of thousands of people, who converged on the Rhema Christian Church, Sango Ota, a suburb of Ogun State, recently knew no bounds as able-bodied and physically challenged people converged freely to praise God.

The congregants prayed and sang like the biblical Paul and Silas, the Holy Ghost came down and wrought miracles among them at the special Hosanna Night of Praise of the church.

One of the groups that performed at the programme was Jesus Enabled Wonders, a musical band, led by Mr. Tokunbo Oyetunji. All members of the group have one physical challenge or the other, such as lameness, blindness and others.

Oyetunji, however, asserted: 'Disability is not inability, neither could disability be used as a sentiment to get to heaven. When I fall down, you will not be doing me any good thing if you attempt to raise me up. Rather, you will be helping me to feel belonged and confident if you watch me get up on my own. Because you are physically disabled, does not stop you from being what God has created you to be.

Oyetunji, who led the group in an awesome powerful ministration that got the whole congregation on their feet, stated that if he refused to do what God wanted, he would not be worthy to be His servants.

The 10-minute performance by the Jesus Enabled Wonders did not only unlock deep passion, it also defined the time and modalities the All-Night of praise was to be, as the whole congregation found a real reason to praise and thank the Lord.

With the exhilarating performance by the group, the star attraction of the night, popular gospel act, Buchi, did not have a difficult task, keeping the whole church spell-bound when he mounted the stage for his ministration.

Buchi, who entered the stage with one of his hit songs, 'It is well with my soul', also dished out other hits like 'Nmarama Jesus' to the admiration of the audience.

If the boldness and contentment of Oyetunji's Jesus Enabled Wonders had invoked passion, the humble beginning of Buchi was an assurance most attendees needed to have a change of heart about the cross.

Buchi did not only minister in songs, he also preached to thousands of people, who attended the programme. He noted that it was part of his burden as a servant of the gospel to liberate those still being shortchanged by the devil.

'Who knows this may be the only opportunity left for somebody to receive salvation and I would have failed in my responsibility. It is not the money paid to me for the ministration that has drawn me to this convention of Praise Night but for the opportunity to minister to several people, both believers and unbelievers alike,' Buchi said.

Other ministrations of the night, which also highlighted the essence of praise included a drama presentation, special numbers by the Women Aglow group, Igbo group, Aje Jesus group, the church mass choir and branches.

In his exhortation, the General Overseer of the church, Bishop Taiwo Akinola, spoke on the importance of praise in the agenda God.

'Men ought to thank God. God is not happy with people that complain. If you want to overcome, you only need to give thanks to your Creator,' he said.

Akinola stated further that God was interested in hopeless cases of His creatures foisted upon them by satanic forces, noting that divine intervention called for obedience.

He continued: 'You are to give thanks when there is storm in your life and make your Bible your companion. That implies that all you need is the Word of God, hence no passage of the Bible should be treated with levity.'

On the incessant security threat in the country, the cleric maintained that no terrorist, either Boko Haram or any other, could contend with the Lord Jesus.

He warned that as this world did not belong to anybody, everybody would appear before the judgment throne of God. Drawing inference from the theme of the world convention: Amazing Grace, Akinola charged people that were still perpetrating vices to repent and receive salvation.

Ministering at the grand finale on Sunday, the General Overseer of Christ Apostolic Church, Agbala Itura, Prophet Samuel Kayode Abiara, enjoined the congregation never to allow their hearts to be troubled.

'Those who set their hearts on the treasures of this world, will be blinded of the heavenly grace and while succumbing to all the pressures and pleasures of the world, may miss heaven,' he said.

He emphasised the importance of giving to the underprivileged as Jesus Christ commanded, stressing that only givers and those, who overcame sins, would make heaven.

His words: 'We got this clarification from the gospel at two instances when the Lord said, when we ministered to those in need, we had given to Him directly.'

'Also, the story of the rich man and Lazarus; the rich man because he was a miser, enjoying all he had without giving out to the underprivileged died and went to hell, while Lazarus went to heaven.'

Abiara charged Nigerians to live in reality of the existence of heaven and hell. He added that it was better to build treasure in heaven and not in the world like a young rich man, who had come to Jesus, but walked away sorrowful because he could not give up his wealth to follow Jesus.

He declared that every Christian had to fight three wars; human, Satan and government. He was optimistic that with the grace of God, victory was certain.