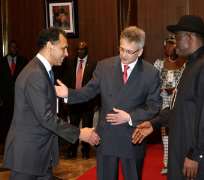 He expressed Nigeria’s appreciation to the new French Ambassador for ‘President Nicolas Sarkozy’s friendship and commitment to a robust relationship’ and support, adding that there were many areas of cooperation between the two countries.

President Jonathan said Nigeria desired stronger economic cooperation with Palestine and Morocco, to build on the long-standing mutually beneficial relations, and assured the three new ambassadors of the Government’s support during their tenure.

The new Ambassadors thanked President Jonathan for receiving their letters of credence and pledged to work hard for the strengthening of relations between their countries and Nigeria.