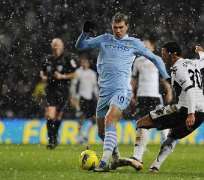 Arsenal stayed in contention for a top four finish by crushing Blackburn Rovers 7-1 at the Emirates where Robin Van Persie scored a hat-trick, while Wolverhampton Wanderers climbed out of the relegation zone with a 2-1 win at Queens Park Rangers.

City's 17th successive home league win since Fulham drew 1-1 there almost a year ago, came after Sergio Aguero fired them ahead with a 10th minute penalty after a Chris Baird foul on Adam Johnson.

Baird's misery continued when he put through his own net 20 minutes later and City added a third from Edin Dzeko after 72 minutes to secure all three points as they produced the perfect response to their 1-0 defeat at Everton on Tuesday.

"It was not easy because Fulham are a very good team. It was very important after the defeat to react very quickly - it was important for the future."

Dzeko added: "It was very hard in this weather, and when it's like this, it's always better to score at the beginning of the game and then it's easier to play.

"It was difficult with the snow, especially in the second half."

City now have 57 points from 24 games with second-placed United, who have 54 points, playing at fourth-placed Chelsea on Sunday. Fulham slipped to 14th, seven points clear of the relegation zone.

VAN PERSIE STRIKES
There was no snow at the freezing Emirates in the lunchtime kickoff but Blackburn were left feeling the chill wind of relegation after being crushed 7-1 by a rampant Arsenal who moved up from seventh to fifth with their first League win of 2012.

Van Persie scored a hat-trick to take his season's tally in all competitions to 28 goals and move into 10th place on Arsenal's all-time scoring list with 123 goals.

Teenager Alex Oxlade-Chamberlain scored his first two Premier League goals while Mikel Arteta and talisman Thierry Henry - Arsenal's all-time record scorer - added the others as Arsenal chalked up their biggest win at the Emirates since moving there in 2006.

Henry, who has now scored 228 goals for the Gunners, scored his first League goal since he returned to the club on loan from New York Red Bulls last month. He completed the rout with virtually the last kick of the game after replacing Oxlade-Chamberlain in the 68 minute.

Blackburn, who had Gael Givet sent off for a foul on Van Persie just before halftime, sunk to 19th place, one off the bottom with the pressure increasing on manager Steve Kean.

AVOIDED DEFEAT
None of the other afternoon matches had any direct bearing on the top of the table but Wigan Athletic and Wolves, who started the day in the bottom two places, both avoided defeat.

Wigan stayed bottom but drew 1-1 at home with Everton after a wildly bouncing ball spun off Everton's Phil Neville and past his goalkeeper Tim Howard for Wigan's goal.

Victor Anichebe, who had only been on the pitch for two minutes, equalised in the 83rd minute for the visitors.

Wolves came from behind to beat big-spending Queens Park Rangers 2-1 at Loftus Road.

Rangers who were busy in the January transfer window adding four new players, went ahead with a 16th minute debut goal from Bobby Zamora following his mid-week move from Fulham.

However Djibril Cisse, another new arrival who scored on his debut at Aston Villa on Wednesday, had a less pleasing home debut and was sent off in front of his new fans after 34 minutes for grabbing Wolves defender Roger Johnson round the throat.

Wolves came back to win with goals from Matt Jarvis and substitute Kevin Doyle and ended the day in 17th place, one place above the trapdoor.

In the other games Norwich City sent Bolton Wanderers back into the relegation zone after beating them 2-0 at Carrow Road, while Swansea City came from behind to win 2-1 at West Bromwich Albion.

The round of matches will be completed when Newcastle United, who are sixth, play Aston Villa at home (1330 GMT) on Sunday and third-placed Tottenham Hotspur travel to seventh placed Liverpool for a 2000 GMT kickoff on Monday.