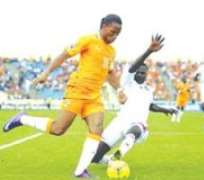 Zambia Battles Sudan
PHYSICAL football and tight marking are just some of what should be expected in today's quarterfinal game between co-host of the 2012 Africa Cup of Nations, Equatorial Guinea and the Elephants of Cote d'Ivoire.

The Nzalang Nacional, which has stunned its critics, is making attempt to out stage the west Africans, who arrived at the knock out stage with a clean sheet and have so far proven to be the strongest side in the 28th edition of the continental flagship. .

The central Africans, debutantes though they are, have left both admirers and critics shell-shocked and after having crashed Senegal out from the competition with a 2-1 victory. .

On paper the Elephants have won the game with a star-studded unit comprising of Chelsea's Didier Drogba and Arsenal's Gervinho, but the Nzalang Nacional could pose as a strong opposition coupled with the huge home support at their disposal.

The Nzalang Nacional has not qualified for the tournament before this edition.

This is the third time Cote d'Ivoire has qualified for the quarterfinal stage of the tournament. The Elephants were once banned from the competition in 1978. Cote d'Ivoire has won the AFCON trophy once and that was two decades ago.

Group A winner, Zambia and Group B runner-up Sudan, will go head-to-head in a battle that will determine the semifinalist which will move one step closer to becoming African champion.

Sudan is at full strength for this match and will be using a very similar side to the one that earned it three priceless points against Burkina Faso in its last match.

Sudan is the only representatives from east Africa at the 2012 AFCON.

Nineteen years ago, the Zambia national team perished off the coast of Libreville in an air crash on their way to play a World Cup qualifying game against Senegal. .

The Zambians have said they want to honour their fallen brothers by winning the final in Libreville to give their heroes and legends, who included coaches Godfrey 'Ucar' Chitalu and Alex Chola who died in the same crash, a befitting salute with the 20th anniversary just a year away.

They finished as second best on two occasions, once in 1974 and again in 1994, when they lost to the Super Eagles of Nigeria.