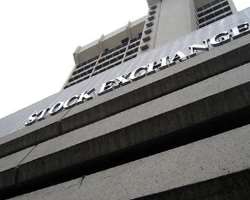 Without doubt, the Nigerian stock market had a bumpy ride in the year 2011, reaching its lowest point in 8 years on November 24, as the All Share Index fell to 19,961.18 points. Though the market rallied briefly at the tail end of the year; standing at 20,730.63 points, the bench mark index finished in the red zone with a year-to-date negative return of 16.36%. This is the worst since the bubble burst in 2008. In terms of market value, investors lost N1.481 trillion as market capitalization of the 202 equities traded during the year declined by 17% to close at N6.54 trillion as against N7.914 trillion recorded in 2010.

Volume and value of traded equities similarly declined when compared to market activities in the previous year. As at the third quarter of the year, market turnover stood at 19.1 billion shares valued at N134 billion traded in 326,515 deals. The banking subsector remained the most active with a traded volume of 10 billion shares, followed by the conglomerate subsector with a volume of 55 million shares. Market breadth was shallow with 22 equities appreciating in prices as against 103 that recorded price decline. The NSE sectoral analysis shows that the NSE Banking Index rose 5.1%, while the other indexes, namely NSE Food/Beverage, Insurance and Oil/Gas indexes dropped by 6.3, 2.7 and 1.7 per cent respectively

Several events interacted together to define the market in 2011. The resolution of the banking sector was concluded during the year with the nationalization of three banks. By this act, all the investors holding shares in the nationalized banks lost their investments. The planned demutualization of the Nigerian Stock Exchange was yet to be concluded as at the end of the year, though the crisis rocking the Exchange was resolved by the appointment of a new CEO. As part of efforts to reposition the market, the Exchange introduced the first Exchange Traded Fund in the Nigerian capital market and has begun an initiative that would compel multinational companies in the Telecommunications and Oil and Gas sectors to get listed on the Exchange.

Across the globe, it was a dull year for the equities market. This was largely driven by economic uncertainties that characterized major economies in virtually all the continents – Europe, America, Asia and Africa. The Euro zone battled without end with debt crises with the worst hit countries embarking in austerity measures while the frontier markets including Africa battled with inflation, interest rate and currency devaluation. The political crises and violence that rocked Middle East and North Africa (MENA) combined to create a downside risk that diminished the enthusiasm with which the year began, especially in emerging markets. Consequently, the equities market worldwide were negatively impacted by weakening global economy, rising political tension across continents, crippling euro zone debt crisis and the fear of its contagious effect. Investors’ sentiments were also negatively impacted by these developments and led to a heightened volatility. Data made available by Morgan Stanley showed that global stock markets dipped in varying degrees in the year 2011.

Against the expectations of market analysts and operators, the domestic market has been frustratingly slow in recovery. As the meltdown continue to bite, the ordinary investor has come to consider the stock market as a nightmare while operators groan under dwindling margins and rising costs. A lot of factors have been identified as being responsible for the slow pace of recovery of Nigerian stock market. Factors such as lack of liquidity, investors’ apathy, weak corporate governance and supervisory framework are quick to be mentioned. However, it can be noted that in the past three years, regulatory authorities have taken steps to address the many charade that characterized the market pre-meltdown – issues that bother on weak institutions and corporate governance. The Securities and Exchange Commission embarked on programmes designed to strengthen the market and have taken some decisive actions in that direction. Part of these efforts was the setting up of Capital Market Committee towards the end of the year with the task of designing and implementing a road map for the market. One of the sub-committees is charged with the responsibility of fashioning ways fund managers can attract retail investors to the market through collective investment schemes and offering of qualitative investment advice.

Where is the market headed in 2012? Stock market behavior essentially is defined by the state of the macro-economy, the interaction of demand and supply for equities which is in turn determined by investors’ appetite. The appetite to invest is a function of the amount of risk an investor is willing to take and the level of confidence in the market. Political environment and the state of global economy are other factors that decide the direction of the market. Available data by the National Bureau of Statistics show that the Nigerian economy is recording moderate growth. When measured by Real Gross Domestic Product on an aggregate basis, the Nigerian economy grew by 7.40% in the third quarter of 2011 largely driven by the non-oil sector and spear headed by the agricultural sector. Favourable weather conditions continue to drive agricultural production just as reforms in the financial sector has continued to show improvement in financial intermediation. The outlook for the economy in 2012 is upbeat and this has been given fillip by the recent positive rating by Standard and Poors on the back of economic restructuring programme of the present administration and the strengthening of the banking sector. It is hoped that, the S&P stamp on the economy will activate foreign investment inflow into the country in the year 2012.

However, the economy might be challenged by inflationary pressure occasioned by price jumps that will certainly arise from the deregulation of the downstream petroleum sector and the payment of minimum wage to public servants. High inflation will definitely reduce purchasing power and lower aggregate demand. This may hamper investment flow to the capital market. Expected public spending, as suggested by the huge deficit budget proposal will drive up interest rate and perpetuate the 2011 scenario where the debt/fixed income market becomes more attractive and consequently crowd out investment in the capital market.

Liquidity remains the most critical of the factors hindering the recovery of the market. The kind of liquidity required to drive the market can only come from institutional investment. Unfortunately, with the burden of margin loans, stockbrokers are incapacitated to engage in proprietary trading in a volume that could assist in driving prices up. We do not have to rely on foreign portfolio managers to lift our market up. It is the responsibility of local investors to activate the market in order to attract foreign interest. In this regard, it will help if AMCON extends forbearance to stock brokers. To enable the banks extend credits to stock market operators, it will be helpful if the CBN would create a fund to guarantee such credits as it did for agriculture, power, aviation and industry.

The fundamentals of the Nigerian stock market are strong. Earnings of quoted companies are improving, while most quoted equities are currently trading below their values. For example, according to Bloomberg Banking Index, Nigerian lenders are currently trading at 0.7 of their book value. This presents very good buying opportunity but market sentiments have remained muted to this and other sectors. In summary, the outlook for the Nigerian capital market is positive if the macro-economy is stable. The defining success factor is a reign on the uncertainty hovering over the political landscape; oil and gas, consumer goods and the banks are some of the sectors with attractive valuations that is capable of rebounding the market in 2012.