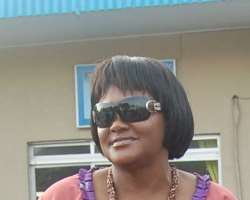 Mrs.Joan Elumelu Okorodudu for and on behalf of her companies, International Business Consortium Limited and Isis Models, is asking for damages of N100 Million Naira ( About One Million Dollar) from Mercia Okhai Ahwuose because of a note she published on facebook entitled “The Naked Truth About Nigeria Next Supermodel”

Journalists were invited to a press conference on Tuesday 22 December 2009 through a text message that was forwarded to their phones around 4 am on the same day.

The conference, which was called at the instance of Barrister. Chris Nwokobia of the Grand House of Law and lawyer to the petitioner took place at 135 Ogudana Street, opposite Zenith Bank, Surulere, Lagos.

Okorodudu was not physically present but her lawyer told the group of journalists that her reputation has been injured by all the defendants and her business concern are at the edge of jeopardy due to the allegations made against her by the defendants.

In the writ of summon,Okorodudu said Mercia “Posted on the internet through the social network popularly known as Facebook (which has over 350 million subscribers and visitors all over the world) a write up and allegations which she titled “The Naked Truth about Nigeria Next Super Model” which were not true about the claimants. The claimants shall be relying on the computer prints of the relevant pages from the Facebook durning the trial.

Okorodudu alleged that the second defendant (Azuka) sent a PRESS RELEASE which she titled “Nigeria Next Supermodel scam!!! To some media houses and News Editors. The claimants shall be relying on copies of the said Press Release durning the trial.

She also said “The 3rd Defendant (Elohor) in the said Press Release by the 2nd defendant was not only ready to corroborate the story of the 2nd defendant but also made further allegations and untruthful statements about the 1st claimant.

According to Okorodudu, Ifeoma Yolanda Jones is joined in the charges for commenting on the write up of Mercia and at same time cast aspersion on her.

She also joined Top Celebrities, Global Excellence and News Of the People as defendants in the suit for publishing the write up in their various publications.

She averred that the said write up and comments posted on the internet through the facebook and the alleged Press Release by the 2nd and 3rd defendants are largely incorrect and portrayed the claimants to its numerous local and international business associates, clients and models as impostors, sham and not living up to its claim as reputable modeling agents.

Mercia, who was a runner up in one of Joan Okorodudu's past events disclosed that Joan and her company has made vain promises to her and other Nigerian girls in the past all in the name of getting them juicy modeling contracts.

Mercia also said in her write up “Joan I won't let you hurt another little girl.And today because you refused to stop your evil deeds, I will expose you. You used Bunmi (Ademokoya) as a bait to drag other innocent girls into your trap, you have nothing to offer anybody, you are a fraudster woman trafficker and thief most of all a pathetic liar”

Marcia has shown her readiness to back up her claims in the court of law. In a phone conversation Azuka told gistmaster.com that she would talk to her lawyers and the necessary defense would be filed since she didn't know anything about the said email. She also disclaimed that she operated an email with such address in the first place. While speaking with Elizabeth Isihor Elohor this morning (Wednesday 23 December 2009) she told us that she has not been served a copy of the summon. She described it as a laughable drama.

A senior journalist said the whole thing look faulty from the start. How come the Press conference has only movie and music reporters only except one female writer. All of them can not claim to know what has been going on in the modeling industry because it is not their beat. Who amongst the journalists called ever attended Nigeria Next Super Model. This is appalling.Why not invite style writers?”