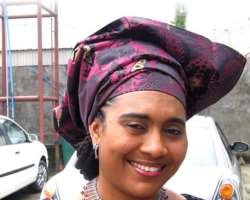 It is no longer news that most marriages involving Top Nollywood actresses have hit the rocks for one reason or the other. While a lot have been speculated on why these marriages fail, a recent investigation has revealed that top on the list are money and infidelity as well as quest for sexual satisfaction and the search to maintain the high profile bestowed on them by stardom which has led many of them into marriages of convinence and most times, they jump out of the relationship as soon as they go in.

Some of the victims of the broken marriages include:

Monalisa Chinda:- Hers is the latest marriage break up in Nollywood. It was alleged that the reason for the break up of the marriage of the top actress with her ex-hubby, Dejo Richards is money.

According to our source, the Rivers State-born actress, who had particularly been the bread winner of the household could not handle the heat of her wealth, part of which comes as Globacom ambassador and decided to let loose what she has been holding together over the years. Her marriage produced one beautiful daughter.

Ngozi Ezeonu: This top actress packed out of her matrimonial home many years ago on account of her husbands alleged unfaithfullness as he dumped her for another woman whom he pregnanted.

It was also gathered that before her husband's extra marital affair, she had been allegedly linked with a handsome young actor whose bed she was said to be warming.

Fred and Agata Amata: The handsome actor, producer and director and TV presenter and wife, have always served as a case study of Nollywood couple whose marriage hit the rocks as a result of infidelity. Though, they attribute the break-up to irreconcilable differences, a close source has it that the actor terminated the marriage due to the wife's infidelity while he had also been involved in extra-marital affairs. One of who is a top actress and ex beauty queen.

Stephanie Okereke:- This A List actress is said to be very happy with her divorce as she sees her self as being better of without her ex-footballer husband, Chikelu Ileoanusi.

The reason for their breakup is attributed to financial problems as she took charge of putting food on their table which nearly ruined her financially. Our source also revealed that the screen diva found out that all the stories the ex-hubby told her about himself before they got married were all lies.

Encharia Anunobi-Ekwu: Although, she wanted her marriage with Charles Ekwu to last, the ex-hubby had other plans as he depended on the actress for his own welfare and that of the family until he was caught red-handed making love to their 13-years-old house girl.

She made the actress to file a divorce suit. Revealing the reason for the dissolution of the marriage, the actress said, “it has not been easy because I have always been responsible financially in sustaining the marriage, we have been living in the house I secured as a spinster even after marriage because of the love I have for him.”

Clarion Chukwura: She is one actress who has married two husbands but not with any of them today. She has laid the blame for her failed marriages as the prize she has to pay as an artiste.

According to her, she has realised the fact that men come to them because they are stars and move on immediately they realise that artistes are ordinary people.

Chiege Alisigwe: The breakup of the marriage of this top actress is said to be based on extra-marital affairs. The actress, who was married to a UK-based businessman alleged that the man had other relationships, unable to bear it, she came back to Nigeria to continue her life until she met her second husband last year, an Enugu-based police officer.

Shan George:- She first got married as a teenager but left the marriage after giving birth to two boys, she later married a US-based guy, Tony Nwosisi, but she later found out that the man was married to another woman who had given him children at the time of his marriage to Shan, so she decided to quit the marriage for good.

Apart, form these actresses who have suffered broken marriages, there are others who are single and eager to hook a husband by all means, they include Ibinabo Fiberesima, Genevieve Nnaji, Rita Dominic, Uche Jumbo, Dakore Egbuson Lilian Bach, etc.