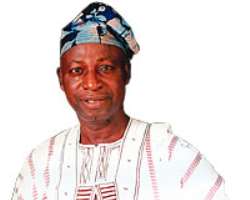 It was an exultant members of the Association of Nigerian Theatre Arts Practitioners, Kwara State chapter that welcomed the presidential campaign train of Comrade Victor Ashaolu (JP) on Sunday, the 18th of this month.

Speaking at an emergency meeting of the association, called to welcome the team at the Kwara State Arts Council, the governor of the association, Alhaji Abdulmalik Oluwasegun Olorunfemi, told members of the association that the meeting was not to endorse or force the presidential aspirant on members but to create an opportunity for members to know him and also ask him questions.

Another reason for the emergency meeting, according to Alhaji Olorunfemi, was to inform members that rainstorm had destroyed the house of Pa Moses Afolabi (a.k.a Baba Keleb), one of the founding fathers of the association in Nigeria. He therefore charged members to come to the aid of Baba Keleb in re-building the house.

In swift response, members came out to donate money, while others pledged blocks and bags of cement. Members who were bricklayers, carpenters, plumbers and so on were not left out as they also pledged to render their services free of charge whenever they are needed. It was indeed an inspiring scene as members came out to willingly give or pledge something.

Responding in an emotion-laden voice, Baba Keleb thanked every member for their love and concern for his welfare. He said he was proud to inform the gathering that the aim of establishing the association had not been defeated despite the many problems ravishing the association.

Explaining further, he said the dream of the founding fathers was for the association to serve as a family for all members; a forum to assist, encourage and uplift one another. He therefore concluded by praying for the continued peaceful and united existence of the association and its members.

In his response, Alhaji Olorunfemi commended members for promptly rising to the occasion by cheerfully giving their widow's mite. He nevertheless noted that what was realized could not do any significant work on the house and so the need to reach out to corporate organizations, individuals and even government to assist the association in re-building the house.

The governor then turned to Comrade Victor Ashaolu to tell the gathering his purpose of coming to Kwara State, but observing protocol, the soft-spoken administrator explained that he would want his National Campaign Co-ordinator to first address the gathering.

Amid loud ovation, the National Co-ordinator of Comrade Victor Ashaolu for ANTP President, who is also the deputy governor of Oyo State ANTP, Chief Toyin Adegbola (a.k.a. Asewo to re Mecca), took to the floor. She first commended the governor for the smooth relationship that is so evident between him and members. She urged him not to stray but remain dedicated till the end of his tenure so that it would be said of him that he finished well.

On the purpose of visit, Madam Toyin (Adegbola) confessed that she was formerly in the forefront of those opposing the ambition of Comrade Ashaolu over the years. She further confessed that in order to discredit him during the last election, she even granted a media interview where she alleged that he was not a member of ANTP, but now, according to her, “we have succeeded in achieving our heart-desire and it is glaring that it has profited us nothing…, the only person I believe that can help us out is Ashaolu.”

Enumerating reasons why she believed Comrade Ashaolu was the best choice for the association, the Nollywood movie actress said Comrade Ashaolu cannot be intimidated by any marketer since he does not act. And so, it would be hard for any marketer to threaten him by removing his picture from film jackets.

Again, as an administrator to the core, Comrade Ashaolu does not seek to go to locations to act and according to Mrs. Adegbola, this is the type of person best suited for the job. She added that no artiste would forgo his job to diligently face the affairs of the association, but Comrade Ashaolu is an administrator who has much time to attend to the affairs of the association.

Asewo-to-re-Mecca further told the gathering that while Comrade Ashaolu laws National Secretary of the association between 1995 to 2001, he did much for the progress of the association in terms of members' welfare and general wellbeing.

Alhaji Abdulfatai Adeniyi (a.k.a. Dankasim) also extolled the virtues of Comrade Ashaolu, explaining that he knows much about the ANTP constitution. He cited as an example the last delegates' conference held in Ibadan.

Dankasim also told the gathering that Ashaolu interpreted flawless many thorny issues in the ANTP constitution, things which were confusing to many members. He concluded by telling the presidential aspirant, “…I believe you are the Joshua of our time and you shall be there, insha Allah.”

How he planned to end the alleged tyranny reign of marketers and also improve the welfare of members of the association topped the list during the question period. Members were anxious to know how Comrade Ashaolu planned to tackle these problems and many more if voted in as the next president.

In his response, Comrade Ashaolu explained that in tackling these problems, there is need for artistes to ask themselves “if they are actually doing the right thing. He said members should first stop enslaving one another and be honest in their dealings with one another.

To achieve this, the presidential hopeful said if voted in, his administration would introduce minimal wage into the association to ensure that no artiste is cheated.

On the issue of marketers, Comrade Ashaolu explained that his administration would dialogue with them on the way forward and also plan modalities that would ensure a peaceful interaction between the marketers and the artistes. The Theatre Arts graduate also hinted that there are many sources for artistes to market their works which his administration would undertake if voted in.

On piracy, Comrade Ashaolu explained that he is well acquainted with the work of pirates and has plans on how to clamp down on them. He said, “even marketers pirate one another and for every shop that sells films at Idumota, there is a duplicating machine behind it. I was a member and director of Nigeria Copyright Commission for 3 years. I know a lot of things about piracy.”

Speaking with this reporter after the meeting, Comrade Ashaolu said he is not new to the affairs of ANTP and he has a blueprint on how to take the association to greater heights if voted in.

He also said members needed to be educated about the job. According to him, “everybody cannot be an actor; we would encourage members to be good in aspect of theatre. It is not good and unprofessional for one person to be the director, producer, lead actor. It tells on the health and that is another reason actors are dying.”