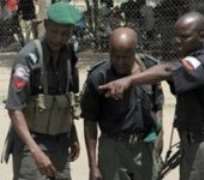 
Police in northern Nigeria say they have found another group of women and children abducted by the Boko Haram sect, locked in a house in Maiduguri.

The group were in a deplorable condition, officials said, and one baby is believed to have pneumonia.

The military now says 700 people were killed in Maiduguri alone during violent clashes between police and the Islamic sect.

An earlier tally of victims of the unrest put the figure at 400.

The Boko Haram compound, he said, was being used as one of the burial sites because bodies were decomposing in the heat.

More than 200 women and children have now been found over the last week, locked in buildings in Maiduguri.

The most recent group of 140 is being housed at the local police headquarters, and have been visited by the Red Cross and the National Emergency Authority.

A Red Cross official told the BBC in Maiduguri that the women had been abducted by Boko Haram from six different states across northern Nigeria.

Last week, the police rescued about a 100 young women and children from a house on the edge of the city. Many said they were the wives of sect members, and had been forced to travel to Maiduguri from Bauchi state.

The BBC reporter in Maiduguri says the Boko Haram sect believed that their families should accompany them to the battlefield.

Maiduguri is the capital of Borno state but the fighting spread to cities across the north of the country and the total number of dead is unknown.