I Couldn’t Go Into Prostitution To Make Money – Kehinde Bankole 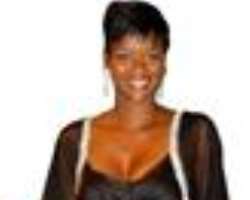 Unlike several other contemporaries of actress, Kehinde Bankole, she is one lady who has achieved fame through a dint of hard work, persistence and determination to be independent and make money rather than living off her parents even at a young age of 16.

She set out to make money while in the second year of her senior secondary school but got fame as well doing what she now enjoys more than anything else.

“I actually set out to make money, but I've become famous. I've encountered inspiration, attained knowledge, and my mind has been broadened. I started out wanting just to make money but I've learnt about the beauty of the art and it's priceless. Nobody can pay you for your art or what you can do. I think I was in SSS 2 when I decided that this is what I wanted to do.

“It was just something that happened on its own. It all started with the need to make money, sustain myself and survive. So I started from modelling. And what inspired that was when I went for a beauty pageant, Miss Commonwealth in 2003 and made top 10, it made me realise that I could make money from modelling. I immediately left the modeling camp and started going for auditions.

“I got some things from modelling, all this time, I was still in the choir in the church where I used to sing. Surprisingly, I discovered that I can make money from singing, so I sent proposals to people like Jimi Odumosu and Wale Adenuga among other people.

“The response I got I followed up and did a few soundtracks for Binta and Friends, Super Story, Papa Ajasco, and for Yoruba movies like Basiratu Baseje and others. So I began my journey just because of the need to make money but going deeper, I began discovering other things. I began to go for drama auditions. But later I felt more passionate about certain things among all of them. And what I'm really passionate about is acting. But the greatest passion of them all is music,” Kehinde, whose twin sister was instrumental to her movie career, said.

The damsel, who recently won the Best of Nollywood Award for Female Revelation 2009, however stated that her resolve to make money early in life wasn't as a result of poor family background but a sheer desire for independence.

“I'm not from a poor background rather I'm from a moderate home but the need to make money for me came from the spirit of independence. I want to be able to do some things for myself, I have to do certain things for myself and to get those things done, I sat down and thought to myself, what can I do to make things work for me. Then I realised that I couldn't go into prostitution and that everything I get takes an amount of work. So I told myself I need this without bothering my parents about this. Let me be independent so as to provide these things for myself,” she said.

Her sojourn into entertainment as a whole has left this mass communication graduate of the Ogun State University dazzled with the arts and she has this to say about some of her experiences on set with top directors.

“I think I stayed on the Super Story set because of the bad roles that I played and the direction of Antar Laniyan, who was our director. He's a very good director, I got better with every role. Like when I did Eno, I was new, I was just being taught so many things by Antar Laniyan. When I now went back to do Caro, I gained experience, I put myself under his tutelage and became better.”

Kehinde has been in the make believe world for over 11 years starting off as a stage actress at the Redeemed Christian Church of God (RCCG).

Kehinde, who tries to keep her relationship and single status off the public glare, has been one of the major faces in soap operas like Doctors Quarter, Super Story, Papa Ajasco and some Yoruba movies.

The slim Kehinde, who had at some point tried to increase in shape, stated that she intends to become one of the top motivational speakers in the country.

“I give motivational speeches and talks especially on business and entrepreneurship. I'm an entrepreneur, but more into anything that has to do with the media-I can present, I can anchor shows, I can sing, I can act, I can model and all that,” Kehinde said.

On her achievement in the entertainment industry she said, “ I'm so happy for the achievement and I hope and pray I would be able to do more. The accolades and awards make me feel good and tell me I still have more to do and achieve.”