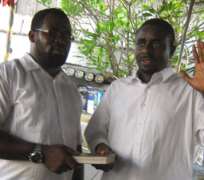 A mild drama ensued on Monday at the secretariat of the Actors Guild of Nigeria, AGN, in Surulere area of Lagos, when embattled Segun Arinze's attempt to halt the care-taker-committee of the guild from conducting a counter-election that produced actor Emeka Ike as the new president of the guild hit a brick wall.

Arinze last month was appointed to head the alleged government of national unity set up by the Ifeanyi Dike- led Board of Trustees of the guild, with Emeka Ike as his vice as a way of moving the troubled guild forward.

He allegedly stormed the guild's secretariat with a team of policemen from Area D, Mushin, with an intention of stopping the election. However, he failed as the Kanayo O. Kanayo led- interim government, armed with a court order, refused to be intimidated as they went ahead to conduct the election.

In a court order dated 13th of June, 2009, and which was shown to the policemen that came with Arinze, the caretaker committee exercised the power confined on it to conduct a general election for the guild.

He was disowned by the Lagos State chapter of the body, which described his election as a “sham”, labelling him a non-registered member of the chapter. Ike's election is bound to trigger off another round of crisis within the guild.

Before the election, which was endorsed by all state chairmen and delegates of the guild, Emeka Ike had described Segun Arinze as a 'joker', adding that, “Segun is not AGN president and he cannot be one. Constitutionally, he is not eligible to be a president because I learnt he is not a degree holder and not even a card carrying member.

“You can ask him to present his certificate the same way I'm ready to present mine any time. What he is doing is just a waste of time because the real election is what we have just conducted today.”

The spokesperson of the guild's interim national government, Charles Okafor, once noted that “the priority of this interim leadership headed by Kanayo O. Kanayo has a mandate to conduct a credible election that would usher in a new president and executives of AGN, and nothing will change it.

The election will definitely hold.”

He added that with the support of AGN members in the country, all hands have been on deck to conduct a free and fair elections.