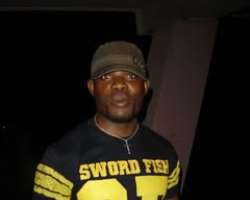 YOU needed to see Nollywood star, Emeka Enyiocha, last Sunday as he stepped into O'jez. He was a moving Chelsea billboard. From his jersey, baseball cap, belt buckle and wristband, Emmy boy, was all Blues. Reason: Chelsea some minutes eralier whipped college boys, Arsenal. His swagger was 100 per cent. Good, recall the last time I told you how Emeka went to Russia to watch Chelsea fall to Manchester United at the Champions League finals? He was happy with himself, but the truth is, Emmy is an unpatriotic Nigerian star. He should be spotting the jerseys of local clubs such as Enyimba, Wikki Tourists, Kano Pillars etc. Madam Akunyili, please ensure you take the rebranding Nigeria campaign to Emeka's home