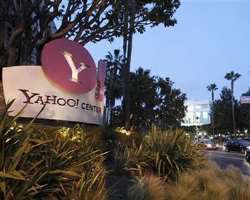 Former Web powerhouse Yahoo is undergoing a strategic review as it struggles to compete with newer heavyweights Google and Facebook. It has been run by interim CEO and former chief financial officer Tim Morse since Bartz's departure.

Thompson has been running PayPal, the online payments unit of eBay, since early 2008, and was previously its chief technology officer. PayPal processed $29 billion in payments in the third quarter of 2011.

Both Yahoo and PayPal declined to comment on the AllThingsD report on Wednesday.

Yahoo, whose services include mail, search, news and photo-sharing, was a Web pioneer that grew rapidly in the 1990s but has been struggling to maintain its relevance and advertising revenues in the face of competition from newer rivals.

In 2008, Yahoo rejected an unsolicited takeover bid from Microsoft worth about $44 billion. Its share price was subsequently hammered during the global financial crisis and its current market value is about $20 billion.

Co-founder Jerry Yang stepped down in late 2008 after being severely criticized by investors for his handling of the bid. The company cut thousands of jobs and later agreed an advertising and search partnership with Microsoft.

Recently, Yahoo has been discussing slashing its stakes in China's Alibaba Group and its Japanese affiliate as part of a share deal worth about $17 billion, according to sources familiar with the situation.

Alibaba has also hired a Washington lobbying firm in a sign that the Chinese e-commerce company would be willing to make a bid for all of Yahoo in the event that talks to unwind their Asian partnership fail.