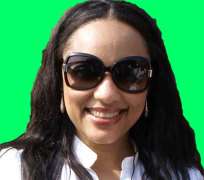 Not counting her alleged romance with nollywood hunk, Pat Attah, back in the days, Lilin Bach, actress and model, has been associated with some scandals. Otherwise, she is known as one of the good girls of Nollywood.

Most people may see her as not too fantastic on the screen. But then, she has played lead roles in many movies and she has a lot of fans and admirers.

Apart from the height, which the pretty actress had attained in the industry, it seemed as if the scripts had stopped coming her way. In addition, she was no longer seen in the movies and at social events.

But the actress seems to have resurfaced again and she is doing it in style. She was present at the premiere of a new movie recently in Lagos, looking quite stunning. We overheard her explaining to a fan why she has been off the social scene for a while.

“Movies have lost the values that they used to have. Stories are not written the way they used to be. You can pick up five hundred movies and only ten will make sense. so why be a part of that kind of thing?” She said.

But the inquisitive fan, who looked as if she was not satisfied with her answer, asked why she came for the event if she was not interested in the movies that were being churned out.

To that Bach said, “My colleagues are the one doing the movies and I support them because it is high time they got involved in producing movies. They know what is happening and can make a difference.”