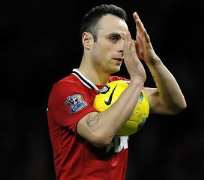 The Bulgarian striker, who became United's most expensive player when he joined from Tottenham Hotspur in 2008 for 30.7 million pounds, had been linked with a move to Bayer Leverkusen or Fulham.

"We'll be exercising it (the option to renew)," Ferguson said. "I think it kicks in in March."

Speaking to reporters before United's Premier League match with Blackburn Rovers on Saturday when he celebrates his 70th birthday, Ferguson dismissed reports that defender Chris Smalling was suffering from glandular fever and could be out for three months.

"He has tonsillitis," Ferguson said, adding that Smalling should return to action next week.

Berbatov, 30, the joint-top scorer in the Premier League last season, has struggled to find a place in the United starting line-up with just two league starts this season but he has netted four times in his last two appearances, including a hat-trick in United's 5-0 win over Wigan Athletic on Monday.

United will top the table if they beat bottom-placed Blackburn at Old Trafford as they did last season when Berbatov scored five times in a 7-1 win.

While Manchester City appear to pose the most serious threat to United retaining their title, Ferguson acknowledged the challenge of third-placed Tottenham.

"They are playing the best football in the country. They could win it on this form," he said.

With the season reaching its halfway mark this weekend, leaders City and United both have 45 points, seven ahead of Spurs who have a match in hand. Chelsea are fourth on 34, followed by Arsenal on 33.