Where has Patience Ozokwo heeled to? 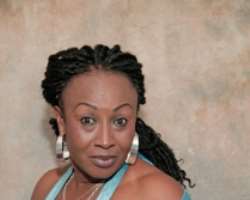 THERE is a producer who doubles as a director and actor, who has commissioned us to find and make sure we get the fiery actress Patience Ozokwo across to him by 'water or by fire'. The producer, who is also a member of the Board of Trustees of a warring guild in Nollywood, hinted that the actress eloped from his set and did not leave her last known address. 'She is holding down shoot of our soap opera' the diminutive director lamented. He then swore to deal with her. In fact, he declared that he didn't want her back on his set any more. Not long after that, his phone rang and the person on the other end was Auntie Patience. We thought Baba Producer would tell the actress off, but whoooosaiiiiiiiiiiiiiiiiiii. He almost got on his knees to ask the actress back on set. Well, we were later told that the producer 'never even pay Mama Gee. Say na abeg helep me level dem dey'. So na which one oga producer come dey rake for?