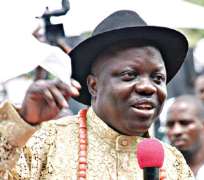 Speaking in a telephone chat from Asaba, Pinnick said that the release of the training grants to Delta State athletes who are based in foreign climes was not just for the Olympics only but also to enable the beneficiaries to get into top shape ahead of next year's National Sports Festival holding in Lagos.

Gov Uduaghan
He added that the such money, was also meant to get the athletes in the best shape when competing at global sports meets.

The Sports Commission boss said that in line with the Human Capital Development policy of the Dr. Emmanuel Uduaghan-led administration, the country has gained immensely from the investment of Delta State in Sports as her athletes often form the bulk of the nation's contingent at international competitions.

It would be recalled that at the just-concluded 2011 All African Games in Mozambique, athletes of Delta State extraction who are on scholarship abroad won six out of the ten gold medals picked in athletics.

'Restricting eligibility to only Nigeria - based athletes will deprive Delta State of making use of the athletes, whom the government has invested in hugely. There is no way an athlete can become great if he stays in Nigeria because the facilities are just not enough to groom world class athletes.

'If we are truly serious about developing our athletes, there is no way that they would not be taken abroad to experience new ways of doing things, which is what we are doing in Delta State. We are trying to develop these athletes and it is so wrong for us to be denied the right to use our athletes in the country', he added.